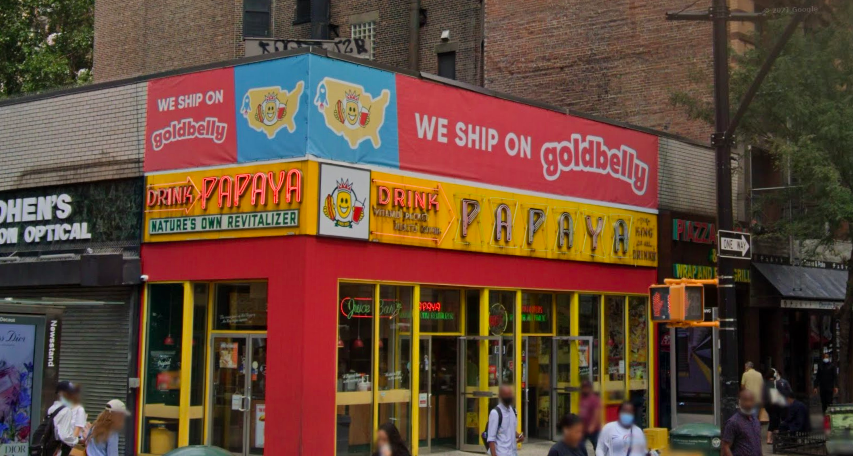 In a Tik-Tok video with the Ramones song “Hey! Ho! Let’s Go!” playing in the background, Michael Quinn, owner of Feltman’s of Coney Island, announced a “cash mob rally” this Saturday, September 17 at noon to prevent the closure of the original Papaya King, which has been at the corner of 3rd Avenue at 179 East 86th Street since 1932. Patch was first to report about the weekend rally.

Demolition plans were filed in June for 171-179 East 86th Street by David Rothstein, an executive vice president in charge of construction at Extell. The real estate company purchased the site last fall, which seemed to be the last straw for the troubled hot dog company which in 2020 faced a lawsuit for trespassing after not paying its landlord rent.

Despite the business still being in operation, the website papayaking.com is down, the hot dog king’s phone number is disconnected, and owner Wayne Rosenbaum’s email bounced back when we tried to reach him for comment.

We spoke with lifelong New Yorker Michael Quinn about the “cash mob” he has planned. Quinn, a former Coney Island tour guide who still takes groups on 2-hour walks through the NYC amusement park, described Papaya King as the Manhattan version of Feltman’s, which describes its product as “the original original hot dog.”

“[New Yorkers] are tired of these developers coming in and destroying the neighborhood,” Quinn said during our interview. He was passionate about coming to the defense of a place like Papaya King where you can still get a hot dog and a Papaya Drink for less than 10 bucks when you’re on the run, “and us New Yorkers, we’re always on the run,” he added.

“What we’re seeing throughout the city, especially during the pandemic, are people not getting breaks from their landlord. I’m for the people. No one is going to say ‘hey let’s get another glass tower in there.’ I just spoke to the manager, Ali, and he said, ‘thank you very much.’ All throughout the city people are saying ‘we want to keep our culture!’”

Joining Quinn on Saturday will be Frank “The Tank”, the hot dog guy from Barstool Sports. Frank created a “Save NYC’s Iconic Papaya King” petition on change.org which, as of writing, has 218 out of 500 signatures needed to be featured as one of the website’s recommendations.

Anyone who wants to join the “cash mob” is encouraged to show up with cash and buy hot dogs and drinks.

Isle of Us, a Sustainable Cafe and Market, Opens on the Upper East Side