At a recent virtual Community Board 8 meeting, members of the Street Life Committee and Upper East Siders tuned in reviewed a liquor license application from Portable Provisions, located at 220 East 81st Street between 2nd and 3rd Avenues (formerly home to Alice’s Tea Cup). 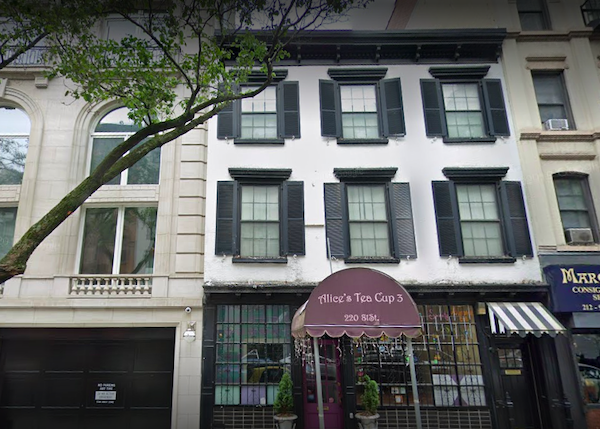 Portable Provisions is an event catering business which primarily hosts corporate clients both offsite and at the Upper East Side location it’s been at for about three years.

A liquor license attorney for the business – Bob Callahan from Michael Kelly Inc – said the owner of Portable Provisions, Kat Alexander, is now seeking an on-premise liquor license to compliment her catering business – but this led to some confusion and concern.

The first person to comment, David Miller, objected right away.

“Yeah, I mean, if there’s ever a liquor license that should not be approved it’s this one. First of all, they’ve been serving liquor at these events for the last six or eight weeks, so I’m not sure what the license is for since they don’t seem to feel they need a license for it,” Miller said. “But also, they’re talking about opening a nightlife establishment in the middle of a residential block on the Upper East Side surrounded by apartment buildings where people are living.” He went on to say that people who live nearby, including himself, have had trouble sleeping because of the late night parties which have been taking place in Portable Provision’s courtyard.

The owner clarified that she’s not looking to turn her space into a restaurant where people can come in and buy alcohol, and that the purpose of obtaining a liquor license would be to provide drinks to guests who are having their events catered onsite. “It’s really mostly indoor, daytime events with a few occasional weekend events,” said Alexander, adding that the majority of her events are held offsite and that she has no intention of turning Portable Provisions into a bar. In addition, she says that they’ve never had issues with neighbors, 311 calls or complaints.

Towards the beginning of the meeting lawyer said the space, which they’ve been in the process of renovating, has 9 tables and 48 seats, a small bar with 8 seats, and a small courtyard with 2 tables and 12 seats – a layout description which tied into some additional concerns from David Miller and other members of the public.

Miller argued that recent renovations in the space have exceeded what permits actually allow, and that construction noise has been another blow to the quality of life in the surrounding area. He also says that “it’s now configured like a bar / nightclub.”

While Alexander appeared to acknowledge unplanned and extended recent construction work, she pointed out that there was a necessity to make an emergency repair because of the state the property was in, and that the situation was life-threatening.

Another property-related concern was over the existing and outdated certificate of occupancy, which attendees argued does not allow for the usage Portable Provisions seems to be anticipating.

The owner additionally responded to concerns by sharing the good deeds she’s engaged in during the pandemic, including prepping and delivering free meals to first responders. She stated further that as a resident of the Upper East Side, she wants to be a part of the community and a benefit to Upper East Siders.

It was a tense meeting.

“It’s important for me to know what I need to do to do this properly, so to be blindsided by people that are upset – like we want people to come and have these conversations with us so that we remedy them in real time.”

“I feel like I’m being painted in a way that’s truly shocking.”

Committee member Marco Tamayo appeared to feel bad for the way things went down throughout the meeting, offering some words of support towards the end.

The board decided to table the application and revisit it at September’s meeting.

We reached out to Portable Provisions owner Kat Alexander for additional comment. Alexander sent us the following statement:

Honestly, the meeting was a very upsetting experience. My company has been safely, legally and quietly operating out of the 220 E 81st Street location since late 2019 (the year prior we rented the kitchen directly next door at 218 E. 81st). Throughout our entire time on E 81st street we have never had any issues or complaints (noise related or otherwise) from our neighbors, only positive interactions and enthusiastic support from community residents and fellow businesses. We’ve actually been so under the radar that there has been a significant amount of interest in finding out what sort of business we are- a stark contrast to Tuesday’s claims that we are a disruption and ‘nightmare’ to the neighborhood.

Mr. Miller’s comments were intended to create an extremely negative, inaccurate and biased portrayal of our professional operations. The illegal gatherings he referenced were primarily private family, friend and staff (all fully vaccinated) barbecues held in our outdoor courtyard (4 total within the past 18 months), held late afternoon into the evening. The ‘illegal construction’ was permitted plumbing work, followed by non-structural cosmetic improvements (paint, new flooring, decorative brickwork, tiling, updated lighting etc.), done intermittently and only during reasonable daytime hours.

During a recently scheduled city inspection, the inspector determined that since the original gas line was underground it could not be tested (a circumstantial oversight from the previous tenancy that we inherited), so we immediately ran an additional above ground line which we DID test in order to meet NY safety regulations. If they had not interrupted me and told me to stop talking that would have been clarified immediately.

There are too many additional points to address here, and I don’t want this statement to take forever defending ourselves- I just have to say it was truly disheartening to hear anyone in our community, particularly a neighbor, so vehemently opposing our establishment, when our main objective is genuinely to be an active support and asset to our community. I can only hope going forward Mr. Miller and I can find a way to respectfully discuss and resolve any issues to our mutual comfort and satisfaction.