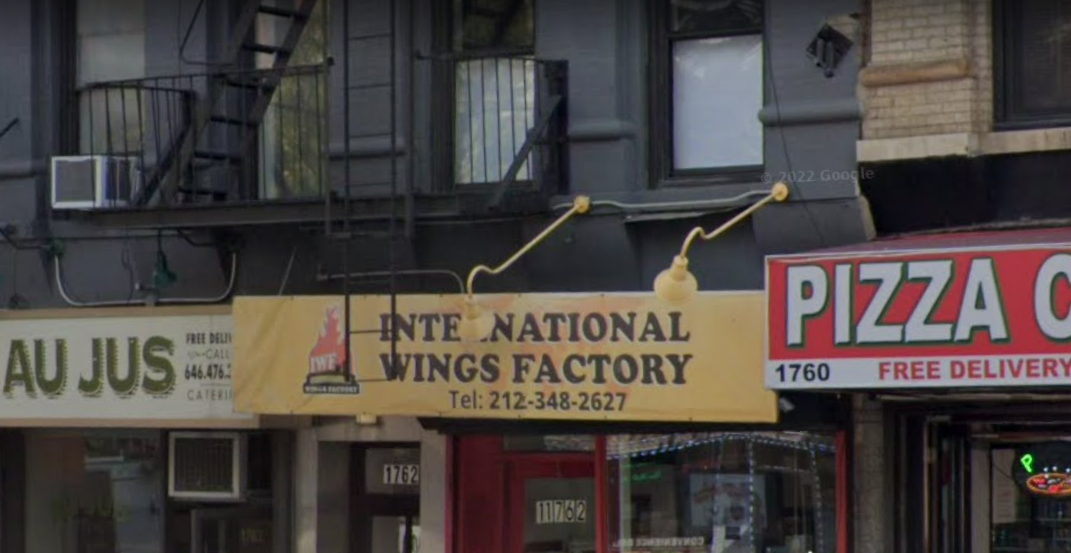 Prior to the pandemic, my theatre company worked out of a studio space at 91st and First Avenue. Around the corner, I discovered International Wings Factory. As a fan of wings, IWF is a great find. It’s a rare hole-in-the-wall shop dishing out quality, crispy wings doused in a variety of tasty sauces. Unfortunately, quality is not enough to run a business. Delivery is now king and restaurants like IWF struggle to make ends meet despite the increased digital foot traffic. As the taste for restaurant food in our living room increases, delivery apps hold more power. These corporations corner the market and restaurants are forced to agree to terms which may lead to their business’ collapse.

International Wings Factory filed a late tax return for its 2020 fiscal year, resulting in a $500 lien from the IRS. The IRS ordered any vendors such as GrubHub and Uber Eats to pay that $500 debt before releasing funds to the restaurant. GrubHub did so without interrupting payments to IWF but Uber Eats withheld over $11,000 for two months for no given reason, crippling the small business owner. The New York Post interviewed the owner, Deepak Ballaney. He stated, “I have overdrawn from my bank and I have no funds to pay my salaries.” Uber Eats offered little assistance to Mr. Ballaney until The Post reached out. Suddenly, the company was very willing to give back Mr. Ballaney’s money.

International Wings Factory’s struggle against delivery apps is hardly a fluke. After the lockdown starved and shuttered restaurants, large corporations such as GrubHub, Seamless (owned by GrubHub), Uber Eats and DoorDash appeared to rescue us. They provided an army of essential workers ready to risk their lives to deliver our food. We became accustomed to this convenience and now, any restaurant not utilizing these networks faces an existential loss in customer accessibility. Today, significantly more people are using apps to order delivery from their favorite local restaurants. Revenues are growing, which sounds like a success story for small businesses.

In 2005, the New York Times estimated that Seamless charged restaurants somewhere between 5% and 15% for their services. Now, 17 years and one pandemic later, that 5-15% has grown to 30%. Restaurant profit margins are famously thin so while revenues are up, profits are way down. Our pandemic-reinforced habits have made ease, accessibility, and delivery so critical that restaurants now rely on delivery; often sending out food while knowing they’re not making a profit but losing money on each order. But of course, customers can always call or order directly through the restaurant’s website and that would solve the problem. You would think.

In 2019, GrubHub was accused of “cybersquatting” by creating over 34,000 fake websites which impersonated those of legitimate restaurants. These shadow websites all look alike but each maintains a URL nearly identical to that of the individual restaurant, often merely changing .com to .net. The shadow websites are designed to outrank the authentic restaurants in Google searches, deceiving customers into thinking they’re ordering directly from the restaurant when in fact they are ordering through GrubHub. Telephone numbers listed on these sites may direct customers to the actual restaurant but because it goes through GrubHub, a 30% commission on sales is activated. Even if no order is placed through these sites or the app, when a customer contacts a restaurant for any reason, GrubHub has been accused of charging restaurants $9 per phone call. One NYC restaurant owner reported paying GrubHub $2,000 a year for bogus calls from just one of his five restaurants.

But we live in a free-market society and any business not wishing to participate with a delivery app is free to do so. Right?

After ordering online but never receiving his food, an agitated San Francisco customer contacted Kin Khao, a Michelin Star Thai restaurant, to inquire about the status of his food. However, Kin Khao does not offer take out or delivery service and the man’s order never reached the restaurant. Kin Khao’s manager performed a quick Google search and discovered that their restaurant was listed on GrubHub and Seamless and DoorDash, all without the restaurant’s permission. Whether restaurants would like to be included or not, delivery apps have been called out for listing non-partnered restaurants on their platforms.

Postmates is another delivery company used in NYC. One day in Seattle, a customer complained about their food being “wrong and cold.” Not only had the food been delivered to a further location than appropriate, but the restaurant had also never signed up for Postmates. The owner asked to be removed from the app and Postmates complied. Soon after, the restaurant reappeared on the app. When the owner called Postmates, he was told that because of how the app is designed, it is impossible to be removed.

Whether it’s an excellent Upper East Side wing joint or your favorite pizza place, if you order from delivery apps, your convenience perpetuates a system which lays a heavy burden on those businesses. That’s not to say you should never order delivery, but the easiest decision is not always the fairest. Despite our hunger for convenience, Googling a restaurant and calling them directly would be a kind thing to do. Sometimes the old-fashioned paths remain as we search for our most responsible way forward.