Home
Food & Drink
The First T.G.I. Friday’s was on the Upper East Side; it was Also the World’s First Singles Bar

On March 15, 1965, the first “singles” bar opened — and it was on the Upper East Side. What you might be surprised to learn is that the bar was T.G.I. Friday’s — what we now know as the ubiquitous and decidedly unsexy suburban chain restaurant.

And in other local news, coincidentally, a new bar, called Irregular Mike’s, had its soft launch this week in the exact same spot, at 1152 First Ave at the corner of 63rd Street. In fact, Mike Egan, the principal owner, is all set to serve corned beef sandwiches on St. Patrick’s Day. He chose this week in part because of the anniversary of that onetime hot spot, T.G.I. Friday’s. 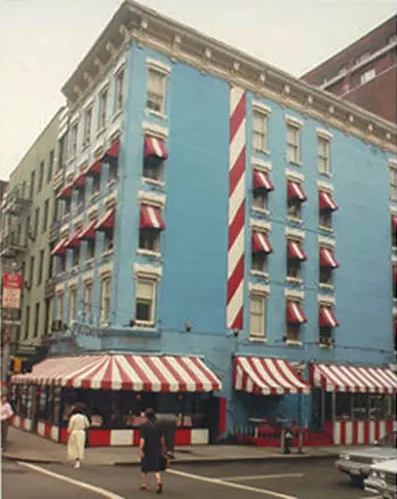 In the 1960s, Manhattan’s East Side was known as the “girl ghetto” because of its concentration of single models, secretaries and other professional young women. The creator of T.G.I. Friday’s, Alan Stillman, who then sold oils and chemicals used in cosmetics and food, thought that opening a female-friendly bar would help him meet some of them. It was not considered respectable for women to visit bars at the time. He noted that the location, being a few blocks from the 59th Street Bridge, was an easy take-off point for the airports, so that there was “a pile of stewardesses” there. 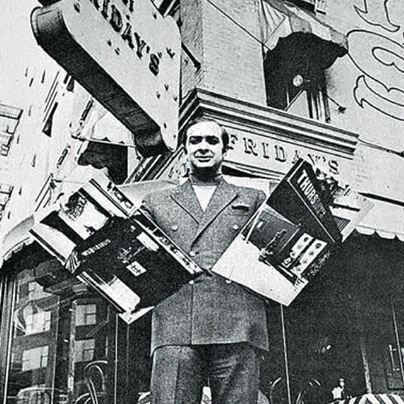 He went to his corner bar at 63rd Street and 1st Avenue, what he has called “a dirty old First Avenue bar with a bullet hole in the window,” and saw potential — both financial and social — in turning the joint into a bar geared toward young people. He installed Tiffany lamps and ferns; the young staffers wore red-and-white striped soccer shirts; and he served sweet drinks called Pink Slippers and, lewdly, Harvey Wallbangers.

Just for the record, some argue that the first singles bar was actually Malachy’s, owned by Malachy McCourt, the brother of writer Frank McCourt. It had opened a year earlier, but Stillman’s venture gets by far the most credit as the very first singles bar. The wild popularity of T.G.I. Friday’s, named after a popular college saying, “Thank God It’s Friday!,” bears that out. It was an instant success with singles, two more so-called “fern bars” soon opened nearby, and the block soon became so crowded that the police started closing it off to traffic on Friday nights.

In part of the 1988 film Cocktail, Tom Cruise’s bartender character is shown working at the original East Side location. Stillman claims the character is based on him.

Stillman credits T.G.I. Friday’s popularity with “being at the right place at the right time” and adds that “a small thing” called The Pill, a catalyst of the sexual revolution, was also a factor. “The Pill became an accepted way of living for single women. If you put that together with the location that we were lucky enough to have chosen and the name … we were off and running.”

The bar was soon followed by a slew of imitators, one of the most famous being Maxwell’s Plum, which opened nearby.

How did this hotbed of swinging singledom become the suburban chain we know today? Stillman, who went on to become a major restaurateur, with properties that include Smith & Wollensky, started franchising the rights to T.G.I. Friday’s two years after opening his bar, and in 1971 Daniel Scoggin acquired the rights to open outlets in eight major U.S. cities. Eventually, the character of T.G.I. Friday’s changed to a casual-dining restaurant for families. The company was sold multiple times—Stillman exited in 1975—and is a franchising operation, with more than 850 restaurants globally. The outfit dropped its apostrophe in 2013.

Meanwhile, the original space is owned by Time Equities, says Scott Scheidman, associate director of New York retail at the firm, who was involved with arranging the lease to Egan. A grand opening for Irregulars, which will have an extensive sandwich menu — and maybe even Harvey Wallbangers if you get lucky — is not yet set, but Egan says the neighbors are “excited to have this place back open.”

Sandro’s to Return to Upper East Side