Fleishers butcher shops were forced to temporarily shut down after its workers staged a walkout over the removal of Black Lives Matter and LGBTQ pride signs last month. All four locations, two in Connecticut, one on the Upper East Side and one in Brooklyn, are expected to remain closed through the end of the month.

A notice at Fleishers on the UES – located at 1325 Third Avenue at 76th Street – says it will not reopen for counter service until the end of August at the earliest. 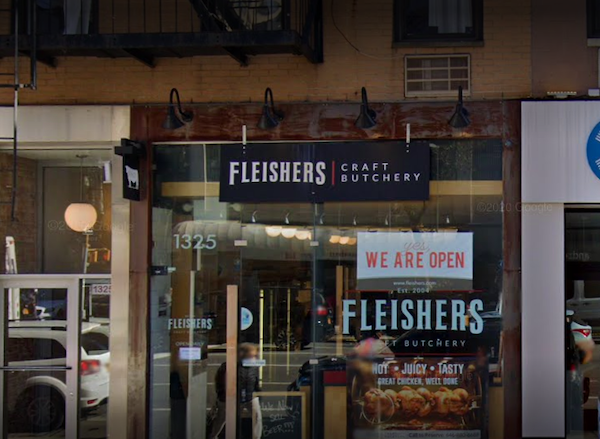 As Forbes first reported, a friend of Fleishers’ leading investor Rob Rosania was “offended by symbols supporting the Black Lives Matter movement in the company’s local shop window” in Westport, Connecticut on June 22. Rosania then ordered the company’s new CEO John Adams to remove the sign.

Adams took a train from New York to Westport, CT to personally remove the sign along with a second one displaying a Black fist raised over a Pride flag. He then returned to New York the next morning and removed similar signage from the Park Slope location.

Ajani Thompson, the former manager of the Park Slope Fleishers, reported to Eater New York that both Connecticut locations organized a walk out. The New York City locations agreed to follow suit. Roughly three dozen of the company’s 40 employees walked out and forced all of the company’s locations to close their doors by the afternoon of July 23.

The signs were put back within 24 hours of the walk out. Rosania reportedly apologized in a company-wide internal letter on August 2 and vowed to make Fleishers a “place where everyone feels welcome and supported,” according to Eater New York. To date, at least half of Fleishers’ employees have resigned.

Fleishers is looking to rehire staff at each of its locations, while offering a two-dollar hourly raise for those who agree to stay onboard. However, the company does not have an official human resources representative after that individual resigned following the removal of the signs. The nationwide hiring shortage is further complicating staffing issues for the butcher.

Krispy Kreme Now Open on the Upper East Side