Things are getting even sweeter between Selena Gomez and Serendipity3. Just one year after becoming an investor in the brand and collaborating on a new ice cream flavor – Cookies and Cream Remix, based off her collaboration with BlackPink – Gomez has now added a $30 sundae to the menu, as her role at the restaurant now includes being an owner and partner, per the press release they issued today.

The dessert that clocks in at $29.95 – The Selena Sundae – was inspired by Gomez’s first ice cream, and boasts three scoops of cookies & cream, hot fudge, cream-filled cookie crumbles, pink sugar, whipped cream, banana and a cherry on top. 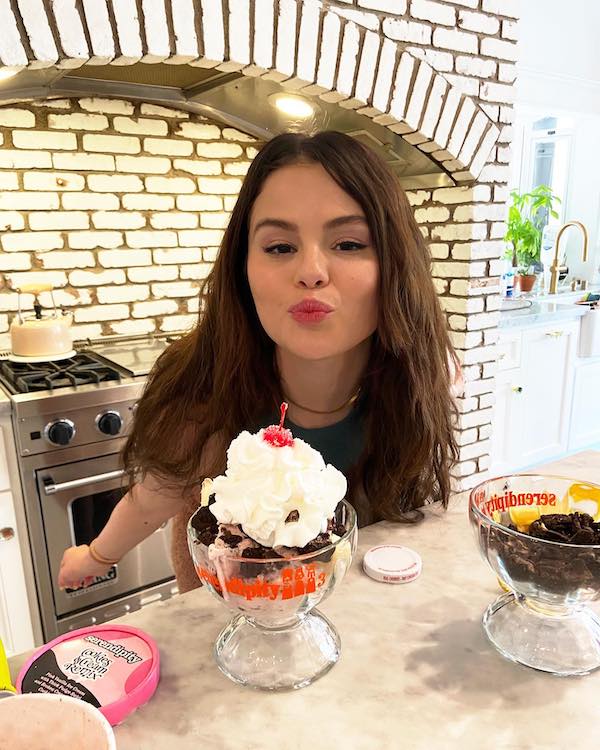 Serendipity3 will be donating 10% of the proceeds from the Selena Sundae to Selena’s own Rare Impact Fund, which aims to increase mental health services in educational settings.

“My memories at Serendipity date back to when I was a kid and I came to New York City for the first time. I’ve always loved this restaurant, and I am excited to celebrate its reopening by adding a sundae I created to the menu,” Gomez said in today’s press release.

Today is sweet for Selena, indeed, as September 1 also marks the premier of her new show, “Only Murders in the Building,” now streaming on Hulu and co-starring Martin Short and Steve Martin. The show takes place on the Upper West Side of Manhattan where locals have been watching the cast and crew film since December 2020.

I just finished watching the first episode to much delight. Gomez has clearly grown up since her days at Disney where she starred on Wizards of Waverly Place. Martin Short and Steve Martin go together, as usual, like peas and carrots. This murder mystery has legs.

Serendipity3 has been in the news a lot lately. After suffering a yearlong shutdown due to the COVID-19 pandemic, they came back in July with a revitalized look. Soon after reopening, the restaurant set a record for the world’s most expensive French fries.

Serendipity3 is located at 225 East 60th Street, between 2nd and 3rd Avenues. serendipity3.com.