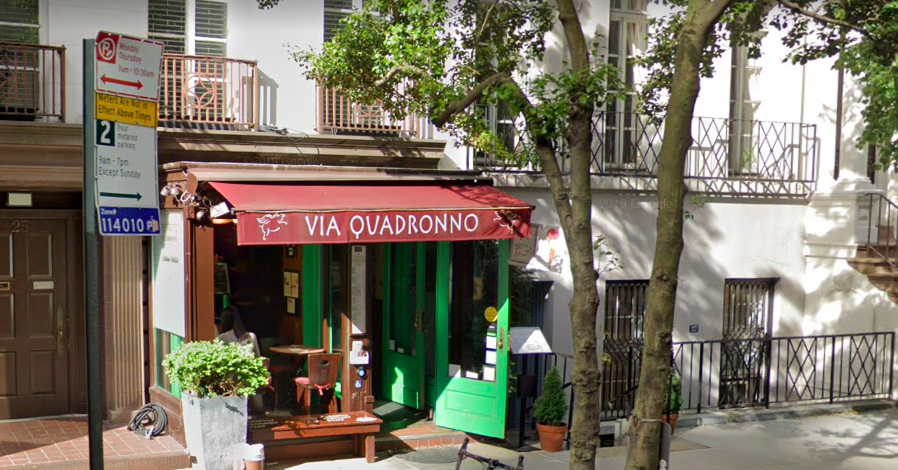 Via Quadronno, the long-standing Italian restaurant at 25 East 73rd Street just off Madison Avenue, is embroiled in a federal lawsuit. Two former chefs filed a joint complaint against the restaurant in 2020, alleging it violated the Fair Labor Standards Act (FLSA) — and just last month, a former dishwasher came forward to make claims of his own.

The suit also named sister businesses Via 88 Street and Antica Bottega as defendants, and was filed on behalf of any other employees who were similarly situated. Via 88 Street is the entity behind Via Quadronno’s location at 1228 Madison Avenue, between 88th and 89th streets. Antica Bottega, now closed, was located at 7 East 59th Street.

Via Quadronno is the New York offshoot of the legendary Milanese paninoteca. The popular eatery opened in 1999 and has since won high praise for its trattoria-style fare. Conde Nast labeled it a “neighborhood institution” (and celebrated its lack of cell phone reception in the dining room). Infatuation’s love-hate relationship sees the sandwiches triumph over a “very expensive, very uncomfortable place to eat.” It also self-heralds as the “best cappuccino and panini in NYC.”

Former employees Chunyung Cheng and Shiguang Chen have been part of this success.

Both plaintiffs allege that the defendants, jointly and severally, failed to pay overtime wages, failed to provide the required wage notice at the time of hiring, and did not give any fixed breaks or mealtimes. “Defendants knowingly and willfully operated their business with a policy of not paying Plaintiffs and other similarly situated employees either the FLSA overtime rate (of time and one-half), or the New York State overtime rate (of time and one-half), in violation of the FLSA and New York Labor Law and the supporting federal and New York State Department of Labor Regulations.”

The chefs sought 12 forms of relief in their 2020 filing, including having the court designate their complaint as a collective, opt-in action that would also grant compensatory damages for unpaid compensation, punitive, liquidated, and statutory damages, and back pay with both pre and post judgment interest if successful.

A series of amended complaints followed. The last was in May 2022 and included a new plaintiff, Marciano E. Espinal, a former Via Quadronno dishwasher and cashier from February 14, 2014, to March 15, 2020. He, too, alleges that he did not have a fixed time for meal breaks, was paid a flat hourly rate with no overtime compensation, had only ten minutes to eat when on shift, and was “on call” during that time.

Though the relief sought in the May 2022 amendments does not change much, this latest iteration includes a demand for a jury trial. Defendants may file a barrage of motions including one to strike the jury trial demand and others for judgment motions on the pleadings including the one involving Espinal, according to a May 27, 2022 order from United States District Judge Lewis J. Liman.

If the defendants do file any of the aforementioned motions, they are due by June 27, 2022 with any opposition from plaintiffs due July 25, 2022.

As for its answer to the complaint, Via Quadronno et al deny all the substantive allegations without further elaboration, and seek to have the plaintiffs’ complaint dismissed in its entirety with prejudice. Trial is scheduled for February 6, 2023.

East Side Feed has reached out to Via Quadronno for comment; we’ll provide an update if they reply.

Margarita Hotspot Opens in Yorkville; Some Upset by Sign in Window