Metal debris from a passing truck almost hit two photographers and a reporter from Fox 5 NY who were set up to film on the Upper East Side Thursday morning, Fox 5 NY reports about its own injury-evading staff members.

The incident took place at about 5am on 78th and 2nd Avenue, right in front of Quality Eats, where the trio were about to begin broadcasting for Good Day New York. 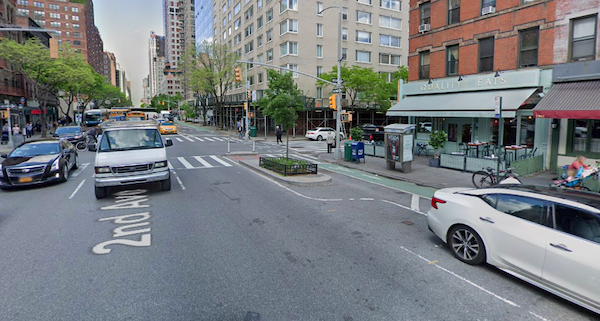 A video of the incident shows a flatbed truck launching what reporter Raegan Medgie described as a “pancake thing flying at [her].” Photographer Tim Daughtry recounts screaming “Watch out watch out watch out!” to alert co-workers Medgie and photographer Paul Barnathan, both of whom took note of his audible warning and escaped the approaching object’s path. The object ended up hitting a pole before it landed on the sidewalk, creating a small crater.

Medgie called the police shortly after the incident took place, telling them upfront that nobody was hurt. She called again after almost five hours as no officers had showed up. After the second call they arrived to the scene quickly.

The NYPD told Fox that they had originally considered the incident “gone on arrival,” later “recording an accident and complaint report for the truck leaving the scene of an accident.”