The smoking gun? A text. Authorities busted the Upper East Sider after he shared a snap of his 7-year-old son toting two firearms in a group chat.

Once law enforcement got involved, the 19th Precinct discovered Davis at his office (a separate apartment close to his primary residence), alongside two guns and ammunition. According to prosecutors, during the authorized November 8 search of Davis’ abode, 12 other ghost guns turned up — as well as 400 rounds of ammunition and plenty of tools used to construct the weapons. 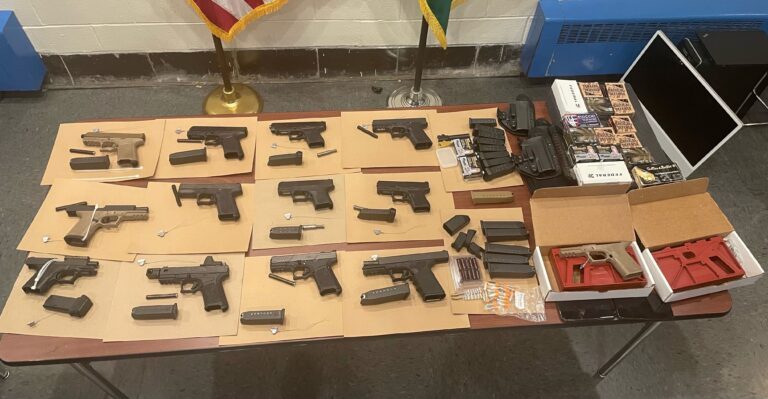 For those unaware, ghost guns are DIY firearms — meaning they’re illegal and untraceable. Many policy makers feel the devices are responsible for a local increase in crime, with recent reports suggesting a 75 percent surge in ghost guns since last year alone. The Ghost Guns Initiative, established by the Manhattan D.A.’s office in conjunction with the NYPD, has seized 80 ghost gun parts, 421 high-capacity magazines, 45 silencers and more gear since their launch in 2020.

“The allegations make it evident that by manufacturing these weapons, Davis put not only the public, but a child in serious peril,” District Attorney Bragg stated. “Using one’s child as a prop to showcase homemade, illegal weapons is inexcusable and extremely dangerous. The proliferation of ghost guns in our city cannot continue. My office is focused on addressing and rooting out ghost guns, and this is just one of several takedowns we have initiated over the past year.”

Given the substantial nature of these allegations (including first-, second- and third-degree weapons possession charges), it’s no surprise that Davis is facing hard time — up to 25 years, potentially.

Police Commissioner Sewell concluded, “These untraceable weapons shoot real bullets, hurt real New Yorkers and cause real harm — and our fight against them will continue with vigor.”