At about 3:15am on Thursday morning, police received a call about a one-car accident on East 60th Street between Second and Third avenues.

An NYPD representative told East Side Feed that the driver — who had just exited the Queensboro Bridge — collided with the Q32 bus stop pole and a metal fence surrounding a tree bed, causing damage to both.

He also knocked over signage from David Duncan Lighting (247 East 60th Street), which could be seen resting on top of his car in a video shared on Citizen. 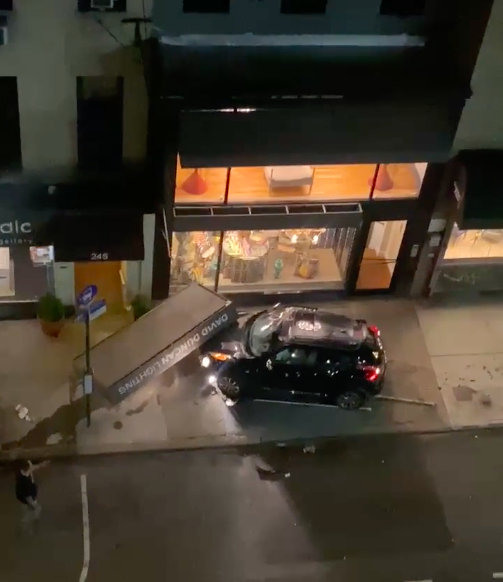 The two witnesses who narrated the video — which also shows a fleet of NYPD, FDNY and EMS vehicles — said the car caught quite a bit of air before landing. They were also under the impression that the driver was drunk, however, NYPD officials told us no arrest was made.

We called David Duncan Lighting and while the person we spoke with didn’t know much about what actually happened, he did confirm he’ll have to file a claim to get the signage fixed or replaced.

No injuries were reported as a result of this incident.