The NYPD’s 19th Precinct announced a bit after 10pm Wednesday that an active police investigation was taking place at 60th and Madison Avenue, requesting that the public avoid the area.

🚨 ADVISORY:
Please avoid the vicinity of Madison Avenue & East 60th Street, on the Upper East Side, Manhattan. There is currently an active police investigation.

About an hour after the initial announcement, the NYPD followed up to state that one victim was being treated for gunshot wounds, which thankfully did not turn out to be fatal.

The incident took place within the outdoor dining area of Philippe, an upscale Chinese restaurant at 33 East 60th Street. 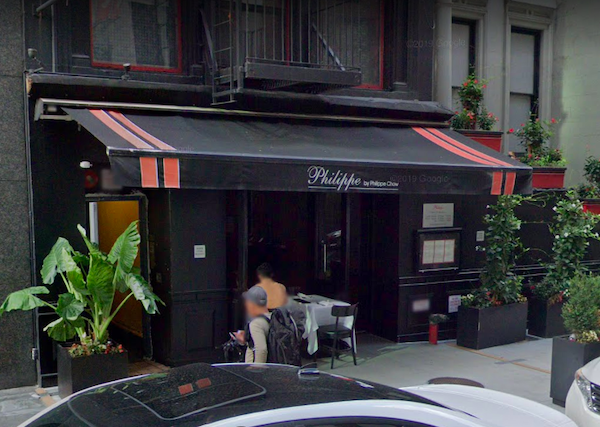 Authorities state that a 28-year-old male restaurant patron was approached by an unidentified individual who “displayed a firearm and demanded his property. A struggle ensued and the victim was shot and the suspect along with two others fled.” The 28-year-0ld was taken to New York Presbyterian Cornell Medical Center in stable condition.

Another Philippe patron, this one a 31-year-old male, was also approached by an armed suspect who stole his watch. “That victim did not report injuries as a result of this incident.”

No arrests have been made as of writing, and an investigation is active and ongoing.

Anyone who believes they have information about this incident is encouraged to call 1-800-577-TIPS or send a direct message to @NYPDTips on Twitter.

Spitting Man Gets Released, Makes National Headlines, and is Accused of Even Worse

Cyclist Hit by Car on 82nd and 3rd Avenue