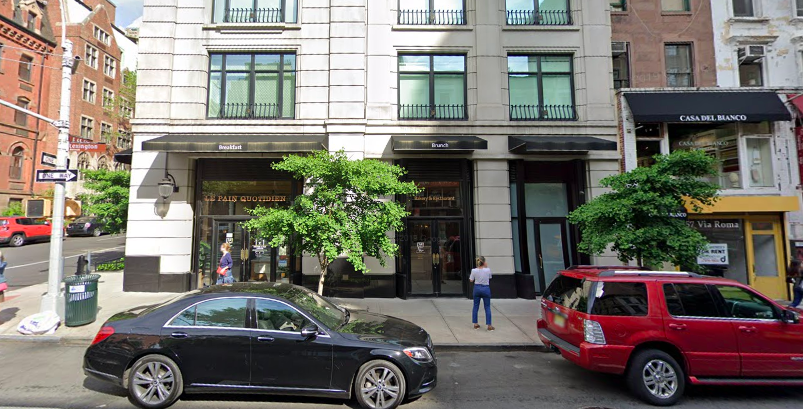 NYPD detectives are on the hunt for an unknown man who earlier this week brought a bit of mayhem to the Le Pain Quotidien at 861 Lexington at 65th Street.

What police are classifying as a criminal mischief incident took place on Monday, just after 1pm, when the man entered the eatery and according to police, “began to swing his jacket in his hand, causing damage to the dining plates” before fleeing south towards East 64th Street.

No arrest has been made as of writing, but the suspect was apparently seen at other locations — and police say they received “additional 911 calls for potentially the same suspect.” It is unclear what those calls were about.

“Our officers have knowledge of the individual & are on the look out for him. When we have updates we will provide them,” wrote the 19th Precinct on Twitter. “The case has been assigned to our detectives & investigation will continue.”

Megan Martin MD, MPH shared a post-incident video on Twitter, which shows dirtied floors being cleaned and one person asking another if they’re okay. “[A] man threw glass bottles and threatened everyone inside. We all ran downstairs. ⁦NYPD⁩ called. No one has showed up yet,” wrote Martin.

In ⁦@LPQUSA⁩ on 65th/ Lexington. MI man threw glass bottles and threatened everyone inside. We all ran downstairs. ⁦@NYPDnews⁩ called. No one has showed up yet. WTF is happening???? What if he had a 🔫? ⁦@MBPMarkLevine⁩ ⁦@NYCMayor⁩ ⁦@JulieMenin⁩ pic.twitter.com/xYM26uNTy0

Martin tells us the officers “canvassed the surrounding area but never came to the restaurant. They apologized for not coming to the scene since many of us were actually downstairs in the bathroom and had no idea what was going on.”

“The system we have now is endangering residents and creating an atmosphere of fear that NYC is not safe,” she added.

East Side Feed reached out to the LPQ location but the person we spoke with had no comment.