Following an investigation that began earlier this year, the city has filed a complaint against the owner of 22 East 66th Street for operating an illegal brothel on the second floor of the Upper East Side building. 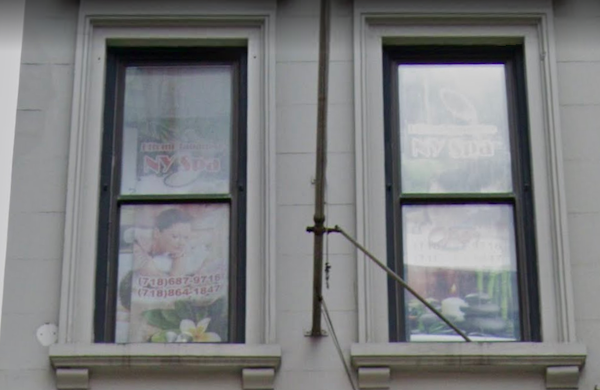 A closeup of the windows from August (Google Maps)

Patch reports that the investigation began “after a member of the public tipped off the NYPD’s 19th Precinct in March, saying that workers there were engaging in prostitution.”

A lawsuit alleges that on June 2, an undercover officer visited the business and a woman agreed to perform oral sex on him in exchange for $300.

On June 11 and June 17, an undercover officer returned, agreeing to pay $300 both times for a “table shower” and sexual intercourse, respectively, says the city.

While the business is not named in the suit, phone numbers posted in the window of the building’s second floor spa match those posted in an online message board for illicit massage parlors.

New York State law cites prostitution as a “public nuisance.” The city is seeking a court order allowing it to shut down the operation while the sheriff’s office clears everything from the space.

One review of the spa from June 13, 2020 reads, “I unfortunately visited this place due to desperation. The only good thing I can say about the spa was how discreet it was. 2 floor walkup crooked staircase. Woman is nothing like the listed pictures.”

“The building owners are listed under fake names in the complaint, indicating that the city does not know their identities,” Patch’s investigation uncovered. “Public records suggest 22 East 66th St. is owned by a resident of Montclair, N.J.”.

Nobody answered the phone when East Side Feed called for comment. Another spa is currently running out of the same building, along with Avena, an Italian restaurant located on its ground floor.

Suspect Wanted For Drawing Swastikas on Upper East Side Street