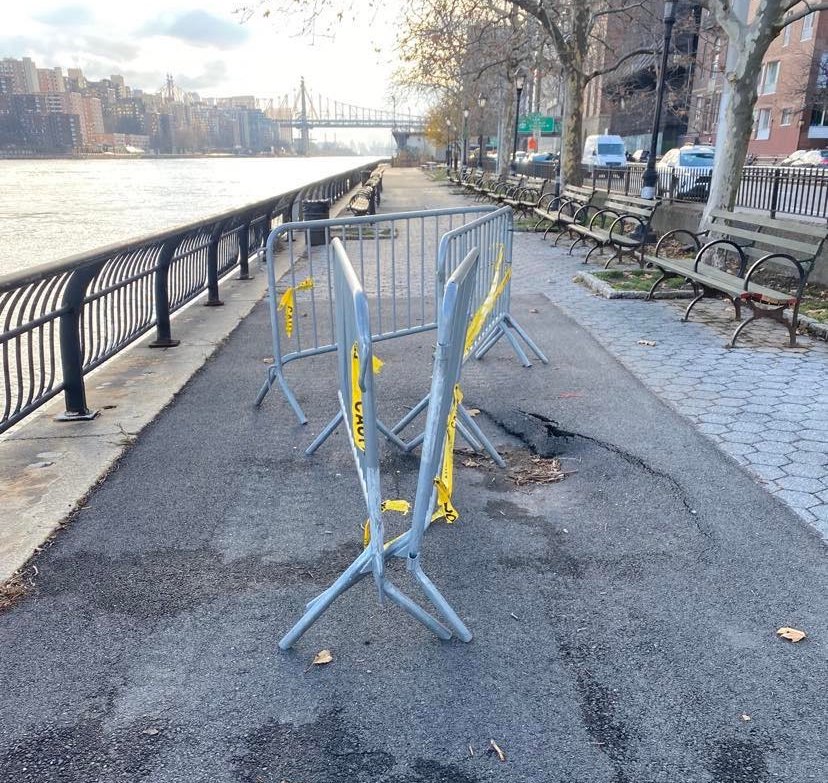 The sinkhole at East 77th Street on the Esplanade first collapsed in 2017. In 2020, Council Member Ben Kallos and Congress Member Carolyn Maloney secured more than $278 million in funding towards esplanade repairs as part of the East River Esplanade Taskforce. At the time, the sinkhole alone (which had reopened that year) cost $875,000 to fix. In July 2020, Kallos wrote, “Where previous repairs have taken years or months, the Parks Department will be using funds we’ve already secured to mobilize and promised to begin repairs in the coming weeks.”

Unfortunately, this expediency does not seem to have had a lasting impact, as Gothamist reports the same section of sidewalk recently buckled again, after less than two years.

Now, Manhattan Borough President Mark Levine is advocating for not only increased repairs, but a change in oversight. Citing the city’s 520 total miles of waterfront space, Levine has recommended the creation of a new city agency “that specializes in waterfront infrastructure.” Announced in early November during the tenth anniversary of Superstorm Sandy, Levine’s proposed coastal protection agency would oversee maintenance and repairs such as those now needed on East 77th Street, as well as long term resiliency projects to ensure safety for those living along the waterfront.

Sinkholes can be a source of fascination and terror in New York City, where their appearance is uncommon but not unheard of. In 2021, performer Danny Wolverton went viral on TikTok for a series of videos crawling into and out of a sinkhole in Bed-Stuy, and in 2020, a man fell into a rat-filled sinkhole in the Bronx, in what the New York Times referred to as a “bizarre and terrifying episode.”

The real issue with sinkholes is that, because the erosion takes place underground without necessarily affecting the surface, their appearance can be sudden. A combination of old infrastructure, climate change and severe weather events has led to a 38% increase in the number of sinkholes identified by the Department of Environmental Protection in 2022. Adding to this misfortune, in a recent City Council hearing, Chief Climate Officer and Commissioner of Department of Environmental Protection Rohit Aggarwala told Council Members, “We don’t know exactly what we would do with more money that would systematically reduce the likelihood of sinkholes.”

When it comes to the East 77th Street sinkhole specifically, the section of buckling sidewalk has been sectioned off for the time being. Hopefully, the next round of repairs will be the last.

A Sleepout at Gracie Mansion