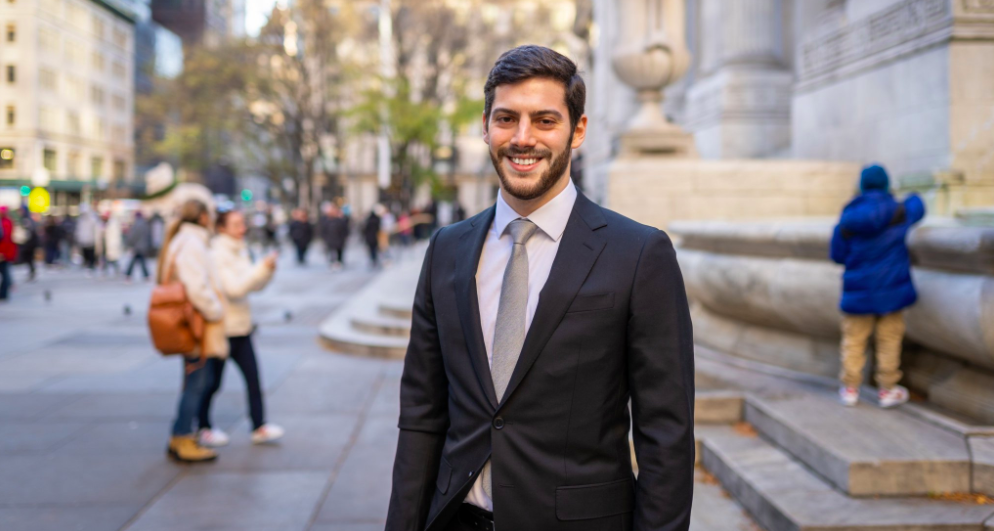 Alex Bores, a district leader and an engineer who worked for controversial tech giant Palantir (but says he quit because they wouldn’t put in safeguards he recommended) has entered the Democratic primary race for an East Side seat in the state Assembly.

Bores aims to represent the 73rd district, where Dan Quart is vacating the seat he has held since 2011. This district includes the poshest part of the East Side — from Fifth Avenue to Third Avenue from 61st street to the mid 90s, along with Sutton Place — as well as Midtown East and Murray Hill. His priorities, he says, include improving education and mass transit, stopping gun violence, keeping New Yorkers from losing their homes, and expanding renewable energy.

In a video posted on Twitter, Bores says he is a lifelong East Sider who grew up in a union family. A graduate of Cornell and Georgia Tech, he says on his website that “the best education he received was on the picket line with his Dad when he was eight years old while his Dad’s union was locked out for fighting for better health care.” His mother clearly influenced his interest in politics, too — his mother, Lori Bores, serves on Community Board 8. Bores was also active at Cornell in the fight against sweatshops and received an award from the American Labor Museum.

As an engineer, Bores aims to find technological solutions to government problems—while preserving digital privacy—and he says he has the chops to do that. “After a foreign government [China] compromised millions of security clearances, including mine, I jumped in and built software to help our government defend us against cyberattack,”  he says in his video.

That was during his four-and-a-half year stint, from 2014 to 2019, at Palantir Technologies, the data-mining company that was founded with the help of the CIA and is famous for using its software to target terrorists after the 9/11 attacks. Its technology is even rumored to have tracked down Osama bin Laden, though that claim has never been verified.

The company uses technology to analyze vast quantities of data in order to identify patterns and relationships. For his last two years there, Bores’ title was U.S. government lead, with a focus on strategic partnerships.

Palantir has drawn fire from many quarters — in large part for its work with Immigration and Customs Enforcement — and Bores told us that he left the company when its top decision-makers decided to renew a contract with ICE. “I never did any of that work and I objected to it internally. I quit when they made the decision to renew without putting in safeguards that I was recommending.” He was not alone. Critics said that information gathered by Palantir was being used by ICE to expand President Trump’s immigration crackdown — by locating family members of undocumented children, for example, and facilitating major raids — and hundreds of Palantir employees reportedly signed a petition to end the contract.

In fact, Bores says that one of his priorities would be for New York to pass a Digital Privacy Act, as California and Virginia have done. “It’s very important that we find ways to protect New Yorkers from companies that do combine data and build large datasets,” he told East Side Feed. “Customers should be notified about how data is being shared, be able to delete data if they leave a service, and have other basic protections.”

Bores says his work in the role of U.S. government lead at Palantir involved more than cybersecurity. “I worked with other companies to come up with better prices for services to government agencies, I partnered with another contractor to work with the CDC for epidemic monitoring, with veteran affairs to get better supplies to hospitals, and the DOJ to hold big banks accountable in their role in the Great Recession. I also worked to stop fraudulent “pill mills” from distributing opioids.” When asked about possible overreach, he said, “None of the work I’m aware of involved combining data across different customers. We focused on data that each agency had access to.”

Bores also founded a non-profit to provide cybersecurity training for electoral campaigns in the U.S., motivated by “the devastating effects of foreign interference in our 2016 elections,” he says on his site.

Currently, he works for a tech start-up called Promise, where he has partnered with local governments and with utilities to provide relief and interest-free payment programs. During the pandemic, he says, he worked with four states to “help 50,000 people keep their homes warm and their water running.”

Bores is president of the company’s transportation and tax practice and was previously head of customer success and data.

One of Bores’ pet projects involved using data to promote mass transit; the former Roosevelt Island resident spearheaded an initiative to get the long-neglected tramway on Google Maps.

His rivals in the race are Adam Roberts, Democratic state committee member (District 76 on the UES); May Malik, former deputy commissioner of the Mayor’s Office of Immigrant Affairs; Kellie Leeson, community activist and international refugee advocate; and Russell Squire, attorney and Community Board 8 chair.