I once had unfettered access to look onto the river, watch the boats come and go, and see the sun settle behind New Jersey daily. Then came the first sighting of a backhoe. New high-rise construction was upon us! My view was going to vanish in favor of a school and I didn’t even have kids. I hoped against hope, but the school obviously won. Me and my view lost.

Off to Brooklyn I went for an unobstructed view of the Statute of Liberty and New York Harbor. I routinely watched the ferry run back and forth to Staten Island, a treat made especially sweet when I was not onboard on my way to or from work there. The sun rose every day and it set every night. And I took just about every single picture I could for months. Then it happened; a new construction nightmare.


A backhoe appeared in the empty lot across the street! Then another. The cranes followed. You see what’s coming. My beautiful view of Lady Liberty was going to be blocked by another high rise and a commercial one at that. Horrendous construction 2, me 0.

So I get it when other city dwellers lament new construction, its obstructive ways, its potential to change the vibe of a neighborhood, and the eyesore it can create to cherished skylines. But that’s part of living in New York City, isn’t it? The landscape constantly evolving. The views are constantly rearranged. Change is the only constant and it can be cruel. And, according to some Upper East Siders, a similar and unwanted change may be coming to the neighborhood.

The New York Post reported about a month ago that UES residents were “at war” with the New York Blood Center (NYBC) and its plan to level its aging 1930s three-story, former trade school home and replace it with a 334-foot life sciences center. The battle will take to the streets this Sunday where a rally is expected in protest of the Blood Center’s proposal to build a 600,00 square foot, 16-story tower mid-block.

The gravamen of the protest centers around the sheer size and purpose of the proposed building itself, including the concern that it would cast a literal shadow on neighboring properties. Friends of the Upper East Side Historic Districts (FRIENDS) is openly supporting Sunday’s rally and outlined its five main apprehensions with the proposed project, four of which focus on the building’s dimensions and zoning concerns.

Notwithstanding the historic and zoning concerns, the strongest argument against the project would seem to be the genuine safety concerns that FRIENDS raises. “The proposal is silent on whether the biosafety level 3 labs (BSL-3), a use that the City’s own Board of Health states poses the potential for “catastrophic consequences,” are available to commercial tenants. This hazardous use may be both for the Blood Center itself and the tenant spaces on the upper floors.”


However, as Curbed reported, New York Blood Center already has BSL-3 facilities and there are a number of others on the Upper East Side, two of which are in walking distance from the Center’s headquarters. Three blocks away is the Weill Cornell Medical College’s Belfer Research Building, an 18-story facility constructed in 2014 to little fanfare. One avenue to the east and one block south of NYBC is Rockefeller University’s own BSL-3 lab.

The Blood Center, which offers crucial services and products including cellular therapy as well as laboratory, medical, and clinical services, makes no apology for its proposed growth. It did address what it feels are essential services that could benefit all with that growth.

“Commercial and academic collaborations with life science companies and other research institutions are essential to bring its discoveries to patients as new vaccines, products, drugs and treatments,” said Blood Center’s executive vice president and chief of staff Robert Purvis to the Post. “We hear the community’s concerns, and we are committed to working together to bring this proposal to the Upper East Side.” 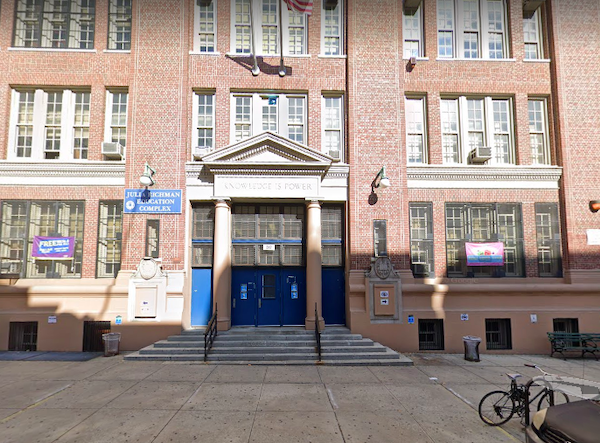 Opponents are not yet swayed by Purvis’ commitment. The rally, led by the Coalition to Stop the Blood Center Tower, starts at 2:00 PM across the street from the Blood Center on the steps of the Julia Richman Education Complex at 317 East 67th Street. Expected speakers are likely to include U.S. Rep. Carolyn Maloney, State Senator Liz Krueger, City Council Member Ben Kallos,  and Assembly Member Rebecca Seawright.

As Patch reports, NYBC has its rezoning certification in hand but a formal vote will be held on May 25 “to decide whether to recommend approving it. After that, it will head to Borough President Gale Brewer, who has also signaled opposition to the project. The City Council will get a final say later this year.”

Biggest Stories of the Month: November, 2022