Home
Odds and Ends
Old Wooden Houses of the East Side

Five years before Mrs. O’ Leary’s cow allegedly destroyed a third of Chicago and claimed approximately 300 lives in the Great Chicago Fire of 1871, officials in Manhattan recognized the danger that wood construction posed, particularly to the success of ever-budding urbanization and the building of new structures in close proximity all over the island.

In 1866, the law of Manhattan forbade new wooden construction below 82nd Street and extended that decree to 155th Street just a few years later.

Untapped New York reports that 12 wooden homes constructed before these laws took effect remain today, including six on the East Side, scattered about from 53rd Street to 93rd Street. We found one more for a total of seven. 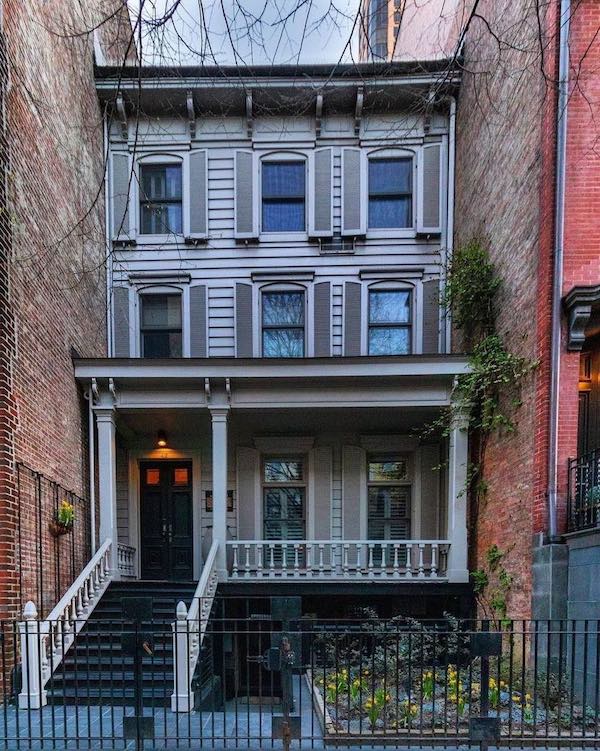 Situated just east of the Manhattan Schoolhouse off of First Avenue, 412 East 85th Street was once the farm of Yelles Hopper and believed to be part of the original Archibald Gracie estate. Built in the Italianate style in 1860 for James R. Reed, the record of ownership, according to Daytonian in Manhattan, shows an Irish family led by Margaret and James Coss residing here by late 1860s. The family welcomed twins into the world on March 10, 1870 but five-month-old Margaret passed away in the home in July.

Downtown poultry business owner Martin Clear and wife Annie took ownership at auction in June 1875. The Clears acted as landlords during their time at 412, renting in 1879 to “Denie D. Matthews, a school teacher in the Girls’ Department of Grammar School No. 37 on East 87th Street” and, with full ownership in Annie’s name as of 1880, to either Louis Goebel or Louis Corbel in 1892.

The home underwent some renovations in the 1890s with the creation of a 3-unit apartment house and a retail ground floor. According to Daytonian in Manhattan, Real estate operator Johanna Seeback “paid the equivalent of $295,000 in today’s money” in 1896 upon purchasing the home from Annie Clear and resold it to Marie Steindler and Elias Gussaroff in 1901. Commissioner of Deeds Joseph Rosenberg called 412 East 85th Street home in 1908 before marble monument maker John Herbst moved in sometime before 1915.

Herbst utilized the front yard as a showroom for Herbst’s Marble & Granite Works (renamed Herbst & Sons around 1932) and the city would have to pay $1,400 in damages after a monument fell and injured a child. Herbst’s business operated until the 1950s and the family stayed in the house until 1966, when the recently formed Landmarks Preservation Commission put it on a list of structures to be considered for landmark designation.

The Carnegie Hill home fell into disrepair thereafter, until current owners Catherine an Alfred De Vido purchased the home in 1996 and “completed extensive work to reconstruct the façade … as closely as possible to resemble the oldest photos of the home available to them.” The building earned its landmark designation on December 13, 2016. 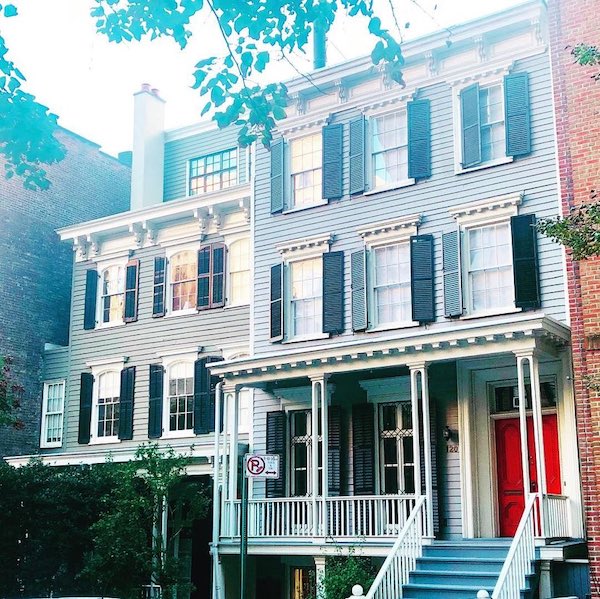 122 East 92nd was surrounded by farmland when carpenter and builder Albor Howell built it for customhouse official Adam C. Flanagan in 1859 just before the Civil War broke out. Though Flanagan sold three adjacent lots to wine merchant John C. Rennert and wife Catherine in 1865, No. 120 was not built by the Rennerts until 1871 after the war ended. Situated between Park and Lexington Avenues, and like 412 East 85th Street, both buildings were designed in the Italianate style.

Catherine Rennert was widowed by 1874 and sold No. 120 to Henrietta Nathan in 1888 before passing to copper Anton Hoffman in 1894. During Hoffman’s 70-year ownership, no alterations were made to the home. After an estate sale in 1996, Lord Anthony Crichton-Stuart, an art historian, art dealer and former head of old master paintings at Christie’s, and his wife, Alison took ownership to the 2,328 square foot home that retains the original crown moldings and hardwood floors.

No. 122 followed a similar no-renovation path after Flanagan sold it to Hampton D. Gage, an election inspector, in 1861. “Renovations were made in 2005 and a set-back roof addition was added.” 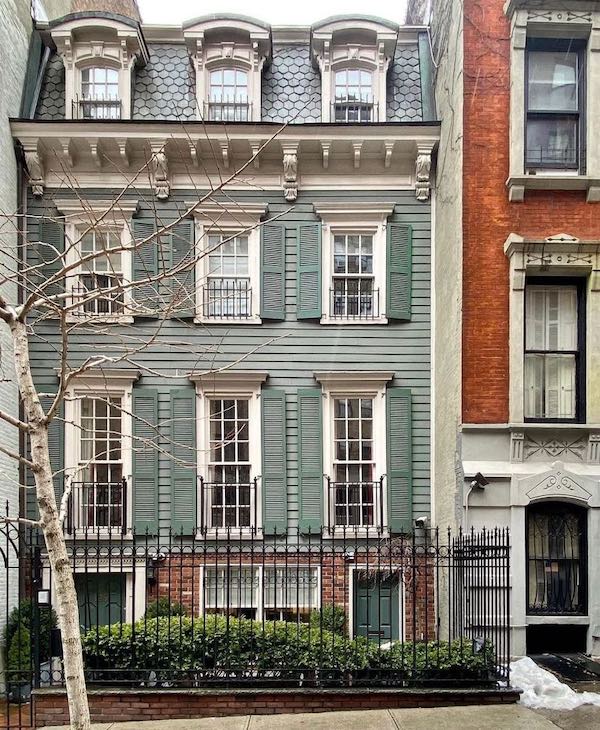 Erected in 1866 for artificial limb maker Henry W. Shaw, 128 East 93rd Street was designed by Edmond Waring and occupied by hardwood dealer Bernard Flach. Owned for decades by Edwin Henes and family from 1879, Mrs. K. E. Fitch rented the home in 1915 from Henes, the “year her 30-year-old suffragist daughter, Isabel, noted as an expert in outdoor sports, married the Commissioner of Public Works, Ralph Folks.” Three years prior in 1912, The Sun reported that the home was listed for special sale as a 3-story basement frame with brick foundation containing 13 rooms, 1 bath, and 2 toilets.

While owned by Hellgate Brewery founder George Ehret, the front porch was removed in 1922 with the construction of the front extension. The front extension was ultimately demolished in 1955 and later sold in 1989 to Pali Capital CEO Bradley Reifler. “Interior renovations had been done in the 1980s and again by the Reiflers in 1995 which resulted in the removal of walls and the loss of many of the interior details; however the exterior appearance of the building remained relatively unaltered.”

TV producer C.C. Dyer lived owned the 25-foot-wide home in the 2000s and lived there with her children who enjoyed the large treehouse in the backyard. 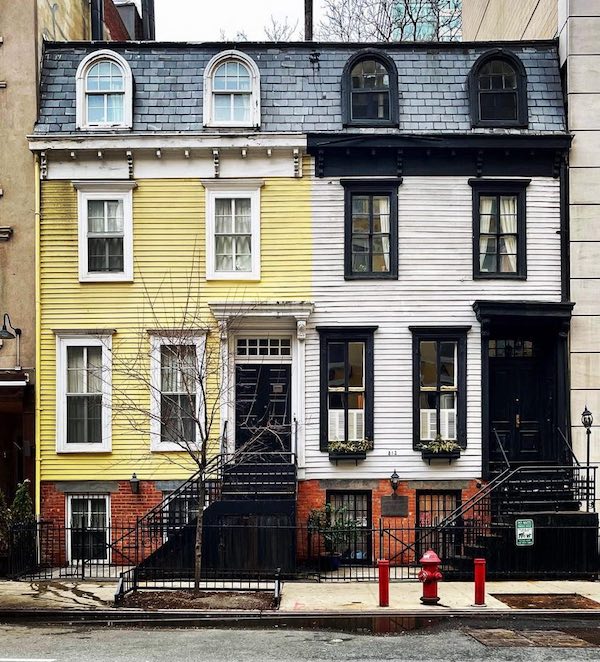 Situated between First and Second Avenues and built in French Empire style, 312 and 314 East 53rd Street were constructed in 1866 on part of the 86-acre farm that formerly belonged to David Devore in the Deutal Bay section of Manhattan. Original owners and builder-carpenters Robert and James Cunningham never resided at either address but did lease out the buildings into the 1870s when they transferred ownership of No. 312 to Elle Crawford and No. 314 to milkman Francis Lahey. It appears Lahey transferred ownership in 1884 and both “little wooden houses led quiet existences for half a century.”

The Evening Post reported on August 27, 1909 that “Isidor Blumenkrohn and Leo W. Vogel bought from the Kolf estate Nos. 312, 314, & 316 East 53rds, three 4-story flats … and resold No. 316 to Charles Wirsing.” It is believed that the homes “were traded as partial payment for a 6-story apartment building on 7th Avenue and 142nd Street” and that Blumenkrohn and Vogel leased out both buildings.

In the 1920s, Lincoln Kirstein, the founder of the New York City Ballet, moved into No. 312 followed by writer, artist, and social activist Muriel Draper. “Draper was renowned as a society hostess and lover of the arts who was friends with Gertrude Stein and was familiar with artists like Henry James and John Singer Sergeant.”

No. 314 was scheduled to be torn down in October 1932 when writer and critic Edmund Wilson moved in after his wife passed away and played host to T.S. Eliot, who stayed overnight in 1933. After Wilson and Draper moved on 1937, both homes exchanged hands several times including for a time when No. 314 was painted a “shocking pink” in the 1960s by store display designer Cecilia Staples.

No. 312 was landmarked in 1968 and was owned by restauranteur Zarela Martinez until it was sold in 2012 to current owners Jessica and Robert Nacheman. In February of 2000, No. 314 “almost became firewood” before it went back on the market and was landmarked in June 2000. The home was ultimately sold to a female stockbroker a few months later and has seen at least two new owners since that time. 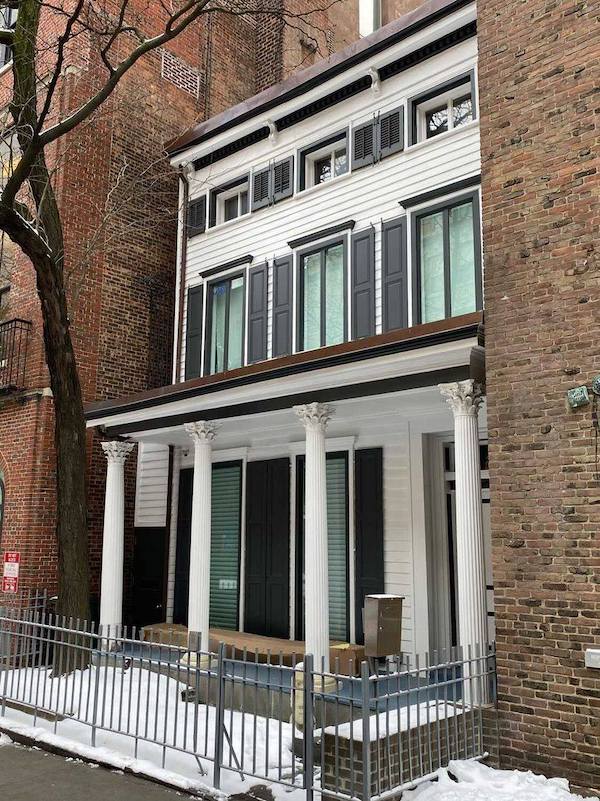 After a subsequent sale in 1864, “Cabinet maker Joseph H. Stage lived here in 1872 when he exhibited his “cottage and suite of furniture (in miniature)” at the American Institute of the City of New York.  The unmarried Helen J. McArthur lived here for at least two years, in 1874 and 1875, while teaching in the Boys’ Department of Grammar School No.53 on 79th Street near Third Avenue. She no doubt rented a room in the house,” according to Daytonian in Manhattan.

By 1878, John T. Rosenkrans owned the home and leased the building to distinguished physician Dr. R. B. James in 1890. Rosenkrans rented the home to Henry and Catherine Breslin and their nine children for $33.00 a month in 1899. Roughly five years later on June 7, 1904, Henry was killed at 86th Street and 3rd Avenue after he was struck by at least one horse of a team of four “pulling a Borden’s Condensed Milk Company wagon.” The wagon’s driver was reported to be asleep. Though Rosenkrans sold the home to bottler Henry Grenhart in 1904, Daytonian in Manhattan reports that the Breslin family lived there until at least 1909.

The founders of The New Republic – social activist and member of the prominent Whitney family, Dorothy Payne Whitney, and diplomat husband William Dickerman Straight – owned the property from 1914 to 1942. The Straights used 160 as living quarters for their staff while they lived on the southeast corner of 5th Avenue and 94th Street.

Sculptor Robert Berks lived at 160 East 92nd in the 1950s before the last reported owner, Tiffany jewelry designer and vice president Jean Schulmberger, held the property’s title from 1956 to 1976.

The building earned individual landmark designation on June 7, 1988. Its 2005 owners sought a permit to demolish “the existing two-story, wood frame, rear yard addition, and the construction of a new two story rear yard addition without Landmarks Preservation Commission permits; and further alterations, including the construction of an additional third story on the new rear yard addition, raising the cornice line and roof at the rear of the existing frame house, eliminating historic window openings at the rear façade of the frame house, and creating new window openings at the subject premises.” The application to make these changes was denied.