Upper East Siders received welcome news this week when they learned that a stretch of the East River Esplanade would finally be receiving a much-needed renovation. A total of $80 million has been designated to rehabilitate part of the promenade in Carl Schurz Park above the FDR Drive between East 81st and East 90th Streets, according to Thursday’s announcement from the Mayor’s Office.

The East River Esplanade, also known as the East River Greenway, is part of the Manhattan Waterfront Greenway, a Mayor Bloomberg era venture that sought to connect all of Manhattan’s 32-mile waterfront “in the form of a multi-use recreational path around the borough.” The nine-mile long esplanade resulted from construction of the East River Drive (today’s FDR East River Drive) which began in 1939, which now runs from Battery Park up to a dead end near 125th Street.

The Harlem River, Hudson River and East River greenways constitute the loop around Manhattan – though some segments of the waterfront remain disconnected from the rest. There is a large gap around the United Nations from East 38th Street to East 63rd Streets, as well as a larger 30-block range in East Harlem up to 155th Street. 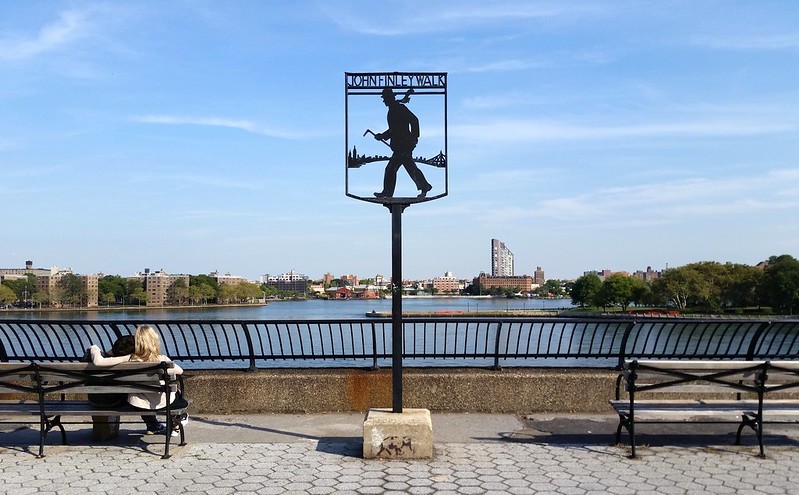 The section of the greenway slated for improvement is a slice of John Finley Walk, named for former president of City College and editor of The New York Times John Huston Finley. “The most visible changes will include smoothing over uneven walking surfaces, replacing street lights, benches and pedestrian railings, and improving drainage systems,” Patch reports. “Meanwhile, the esplanade structure itself — a roof deck built atop the FDR Drive in the 1930s — is also in for repairs. The city’s investment will include mending the esplanade’s underside, renovating walls along the highway and replacing concrete girders.”


Council Member Ben Kallos noted that some sections of John Finley Walk are unusable because of numerous holes in the ground. Jennifer Ratner, founder and board chair of Friends of the East River Esplanade, told Patch that the underside looks like it’s “going to collapse any minute.”

It appears that Ratner’s concerns are founded. On June 10, the Board’s Transportation and Park Committee gave a joint presentation with the NYC Departments of Transportation and Parks and Recreation. The joint address disclosed that field inspections demonstrated that the promenade has large portions of the structure “in poor condition” and that a particular concern is the “joint leakage and overhead concrete spalling above [the] roadway.”

Despite these unsettling inspections, construction is not expected to begin before June 2024, with an anticipated completion date of June 2027. But, according to Ratner, dire repairs are needed north of East 96th Street as well. “More and more places are getting roped off because they’re too dangerous to use,” Ratner said, noting that there are large areas of the waterfront that are completely inaccessible.

But Ratner and Friends of the East River Esplanade are committed to keeping the pressure on. Both were key in the City’s recent allocation of $284 million to fix these unusable sections, including areas around the condemned pier and segments of the walk that have essentially fallen into the East River. “We are working with the Coalition for the East Harlem Waterfront and are dedicated to making sure the repairs are done quickly, safely, and sustainably.”

There is no start date for the project above 96th Street nor for the additional $75 million that Friends of the East River Esplanade helped secure for improvements between East 114th and 117th Streets. However, the designs for these spaces are “finishing up,” according to Ratner, and a new greenway is expected around 125th Street as well.