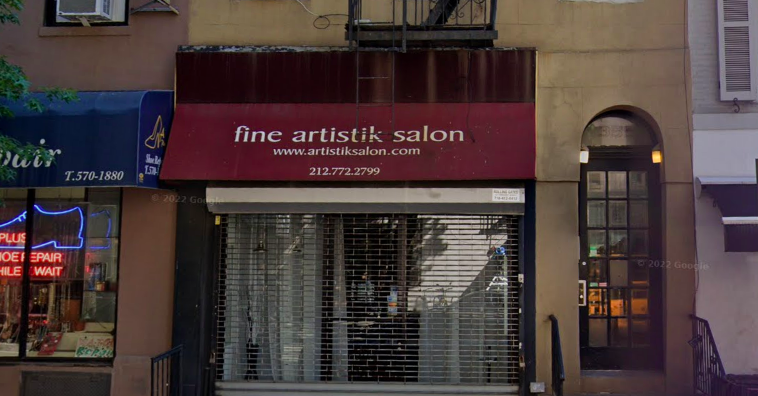 What started out as an uneventful appointment at a neighborhood hair salon turned into a shocking drama days later. The aftermath spilled onto the internet with both sides trading loaded barbs between social media posts and a heated email exchange.

Fine Artistik Salon has been in business for nearly twenty years at 355 East 77th Street, between First and Second avenues.

According to Jacob — a 16-year salon veteran who serves as a hair colorist and manager at the Upper East Side spot — a new client named Rachel booked an appointment on Tuesday, August 24, for hair extensions and highlights. This seems to be the only detail the two agree on.

“She said she had extensions two or three times before. I made the extensions tight because it was clear she was going to pull on them,” Jacob said. “She twirled her hair the whole time when she was waiting; very fidgety the whole time.”

Jacob told East Side Feed that Rachel thought the extensions were too tight at the end of her appointment. He told her they would loosen up but to call him the following day if she was still concerned. “I always offer this to clients, especially first-time clients.”

Rachel did not call or come back to the shop the next day. At least that is what Jacob told us. Rachel left a review on Yelp saying that Jacob “ghosted every single one of [her] 10-15 phone calls throughout the day” but that he did respond “after about 20 calls.” She added that Jacob told her to come in the next day and that he would call her to confirm.

“Never called. Finally I just showed up bc I didn’t know what else to do, I didn’t know if I would hear from him,” Rachel wrote. “Found him sitting alone in the salon on his phone. He offered to refund me my fee for the extensions (which is $350, $100 more than anywhere else), but he wouldn’t refund me for the color.”

Rachel’s version alleges that Jacob told her she would have to wait even though no one else was in the salon and that he went “NUTS” in response to her “frustration at the lack of communication, and [her] pleading to either give [her] a refund or fix [her] hair.”

Jacob has a different take. He said Rachel returned two days later on Thursday, August 26, and that her extensions were noticeably lower; between a half an inch and an inch.

“She was clearly pulling on her hair. It takes months [for the extensions] to get that low,” Jacob said. “She showed up Thursday, yelling [and] cursing. She goes nuts. I told her I will fix it and asked for time to finish the client I was with. But she kept going. She made my client uncomfortable. I told her to calm down or leave.”

Jacob said he refunded Rachel $350 for the extensions, but claims she wouldn’t leave.

“She sat back down and continued yelling. I told her to get out, but she refused to leave. She said ‘I’m not going anywhere’ and started threatening bad reviews and to post about it on social media, saying ‘Ill sue the f*ck out of you,’ threatening to burn the business down.”

The hair stylist said he typically talks about his life with his clients and that he told Rachel about his … but that she used that against him in her tirade. “She came after my kids, she was saying things like I am a bad dad.”

Rachel eventually left the salon, reportedly yelling and screaming on the way out. She alleges that Jacob was the one yelling and that she “could hear his screams half-way down the block.”

At some point thereafter, she posted negative reviews on both Yelp and Google.

“I clicked on [the] profiles that she posted under and saw she did the same thing to six or seven other places with about 11 reviews total between the two profiles,” explained Jacob. “She did this all over. Missouri, Chelsea, Soho, West Village.”

Jacob felt bullied and posted to the salon’s Facebook and Instagram accounts, refuting Rachel’s complaints and posting the negative reviews she allegedly authored about other salons, a laundromat, a Subway sandwich store, and a medical spa.

The email exchange between the two was uglier. Rachel posted screenshots of emails that reportedly came from Jacob where he called her “pathetic and miserable” and threatened to expose her as a “con artist.” One particularly harsh email references Rachel’s father, whom she indicated passed away from COVID-19.

We asked Jacob about the emails and shared the screenshots from Rachel’s posts with him. Though he did not specifically address the contents of the emails, he did acknowledge that there was an email exchange and expressed regret for having engaged in it with her — and says he did so “only because she spoke about my family ill first [sic] and it was becoming annoying.”

“I shouldn’t have said that but she pushed me. I’d forward her emails talking bad about me and my family, kids. Making it personal but I rather not. She used those emails against me. Lesson learned,” Jacob added.

Jacob said that he has not heard from Rachel since and that she deleted the negative Google review. He also claims that she initiated a credit card dispute for the full amount of the appointment even though Jacob said he already refunded her for part of it. If Rachel’s credit card company reverses the charges in full, she stands to gain just over $1,000, according to Jacob.

As for Rachel, unsurprisingly, she has a different view. “I found out that instead of refunding me the $350, he tried to charge my card [an] additional $350.” She added that the salon never refunded her, but does acknowledge that she filed a credit card dispute.

An Outdoor Fitness Space is Going Under The 78th Street Bridge

Homeless Helper: A Hero Delivers Goods to Those In Need