Earlier this month, with notice of only seven business days, Mayor de Blasio directed all of the city’s more 300,000 municipal employees to return to work full time on September 13. Parents scrambled for day care providers. Those responsible for the in-home care of others rushed to find caretakers who could take on the responsibility. And many city jobholders worried about whether it was safe to return full time.

Welcome back to the office, and let’s finish off this year together. pic.twitter.com/PCkTgkbC4a

With COVID-19 infections rising nationwide and in the city’s five boroughs since June, including pediatric COVID-19 hospitalizations and admissions in New York State, the wisdom of a unilateral return without any options for remote work has come under scrutiny.

Mayor de Blasio implied that the city’s workforce was failing to meet the needs of the people and directly stated that the ability to work from the safety of home caused a huge impact “in the wrong direction.” However, the mayor did not cite which agencies fell short or how they did so. He also did not address why all agencies were lumped together.

Jennifer Gravel, the Director of Housing and Economic Development for New York’s Department of City Planning, tackled the mayor’s assertions head on in an op-ed for the New York Times. “Key performance indicators for fiscal year 2020 were as good or better than the year before. And the rest of city government fulfilled its mission as workers were remote, holding land use hearings, conducting primary elections, running the campaign finance system, monitoring air quality, reviewing building plans, managing the payroll for 300,000 workers, preparing the budget, and overseeing the city’s legal affairs.”

Gravel has the support of her city colleagues, including many that chided the city’s largest public employee union, District Council 37 (DC 37), and its executive director Henry Garrido, for doing nothing more than pen an op-ed for NY Daily News the Friday before Monday’s full return to in-office work. Garrido’s opinion piece did little to assuage the fears of the workforce and did nothing to delay their unilateral return to the office.

The city’s employees returned to the office full time on Monday with no action taken by its representative unions at that time to address the mayor’s mandate. Social media was flooded with demands for action and reports of health and safety concerns across numerous city agencies including the Department of Health, the Administration for Children’s Services (ACS), the Department of Education, and the Department of Citywide Administrative Services.

A group called City Workers for Justice has become a welcome home for those seeking to voice their apprehensions. One of the account’s keepers, a Department of Social Services employee that asked to remain anonymous, told us that a main theme is the unsanitary and unsafe conditions that would cause uneasiness without an ongoing global health crisis. These conditions are amplified by that crisis, including a mold issue in at least one office. “People are returning to work to find no changes made or that situations have worsened since March 2020.”

Here are photos of the bolts on the windows at 44 Beaver (DSNY) that were bolted shut during the pandemic. These are the conditions workers are being sent back to. pic.twitter.com/KuJUMoSadl

Other concerns focused on the lack of flexibility regarding unforeseen needs to provide for the care of others, including the required use of personal vacation or leave time if a school closes due to COVID, and the lack of verifying daily health screenings. It was reported to City Workers for Justice that some jobholders have submitted screenings for prior days or have not submitted health screening information at all because no one has provided instruction for where to send that information.

Separately, there is an anxiousness about the disregard of social distancing mandates, proof of vaccination and weekly COVID test results, and enforcement of the mask policy in all communal spaces, including an alleged disregard of that policy inside the mayor’s office. 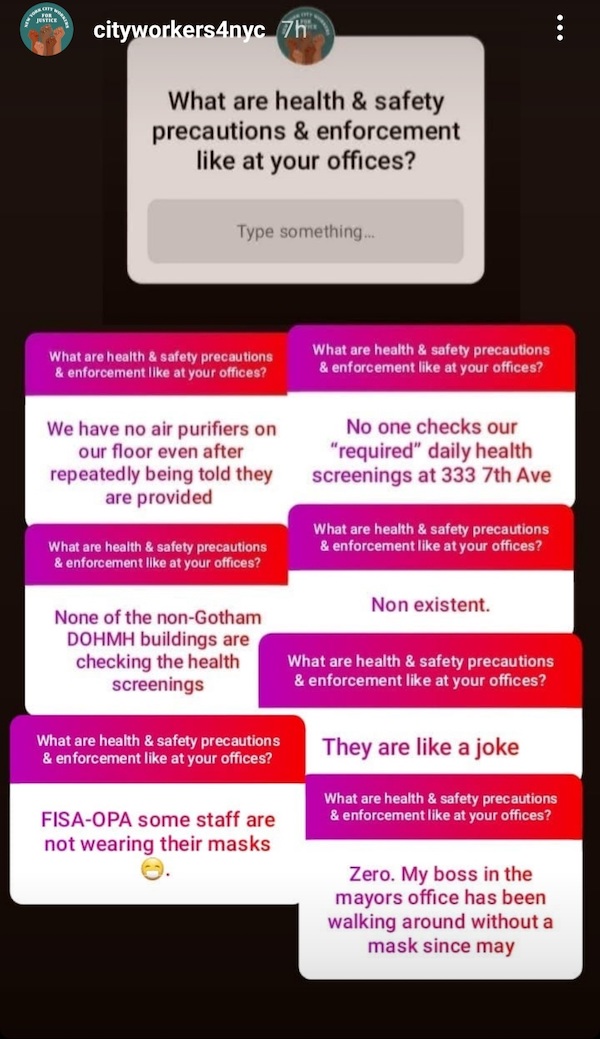 To compound all of this, supervisors are being asked to report their employees for violations, and alternatively, employees are being asked not just to report unsafe conditions, but to blow the whistle on coworkers and their own supervisors. In some cases, city agencies have reported to City Workers for Justice that verification of vaccines and weekly COVID screenings are lagging.

Outside of these concerns, City Workers for Justice was clear about what it is seeing on its end – a unified workforce seeking safer conditions, support for working families, and support for hazard pay for those who have been working in the office since the start of the pandemic.

There may be a ray of hope, however. DC 37 chose not to seek an injunction for an immediate stay of the mayor’s directive, but it did announce that it filed an improper practice petition with the Office of Collective Bargaining (OCB) to stop “Return To Work” for 80,000 non-essential workers to “stop the mandatory ‘return to work’ for 80,000 non-essential municipal workers.”

Unfortunately, that ray of hope could be a small one. City workers are now on their fourth day of a full return and OCB has no mandated timeline to respond to DC 37’s petition.

Mayor de Blasio remains steadfast in his belief that the entire municipal workforce should be judged as one collective body, and that the entirety of it cannot productively work from home like its counterparts in the private sector. “Public servants do their best work when they’re in person at their offices,” he said. “It’s time. It’s time for people to be back at their offices doing the jobs they were hired to do.”