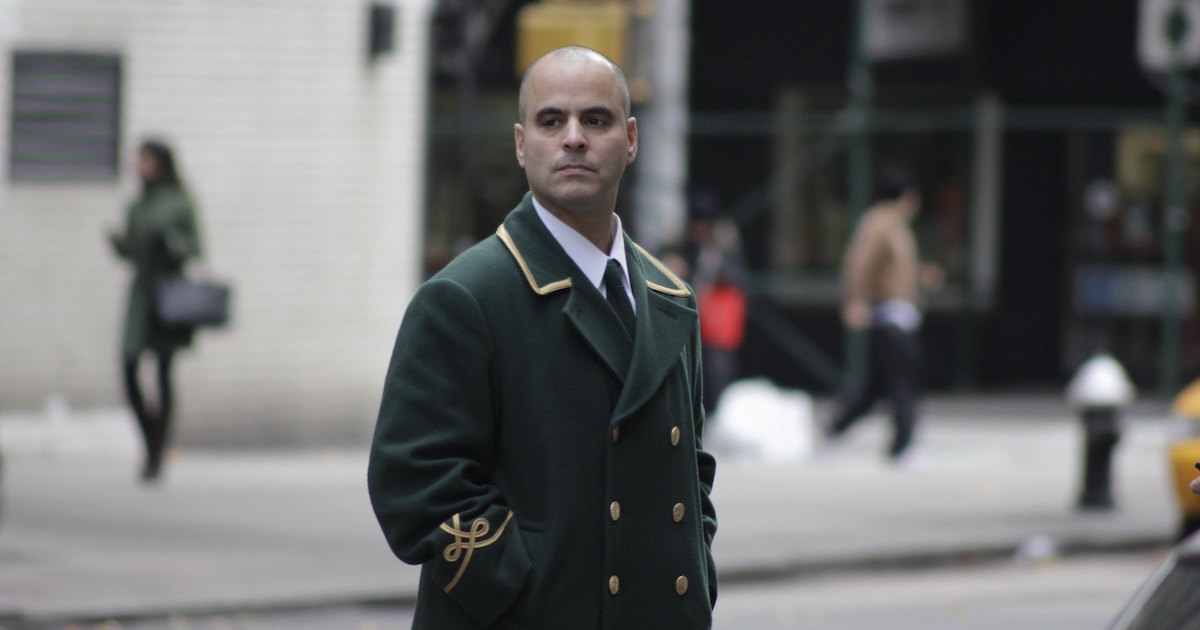 Photo by Flickr user Timothy Krause. NOTE: this is a photo of another Upper East Side doorman; not the one we’re writing about …

If you haven’t had a chance to follow @Eastdoorman on Twitter, you should. Not only will essential Upper East Side updates and neighborhood recommendations pop up on your feed, but you’ll also get a regular dose of some quintessential “only in New York” nuggets.

“You’re never going to believe this but I……”
I’ve seen it all, trust me I believe it.

We recently spoke to the man behind the tweets on the condition of anonymity, as he wished to respect the privacy of his tenants. We can’t share his name or his work address. But we can tell you he’s been working as a doorman all over the city for ten years, after starting out as a maintenance worker at his current building on East 72nd Street.

Inherent to the job of a doorman is the routine peek into city life that most of us do not get. This glimpse – coupled with the intrinsic role of protector, wingman, friend, and confidant to his residents – gives him a unique perspective into both the mundane and unusual moments of life.

He recalls the time one of his tenants was raided by ATF and SWAT teams for his involvement in an underground gambling ring. The door was bashed in and “The new tenant uses it as an excuse to get cheaper rent,” he says.

He was on duty when a tenant called to tell him she was about to give birth in her apartment and wouldn’t make it to a hospital. The unexpected in-home birth was a success and the focus of the building’s management quickly shifted to concerns about the apartment floors being ruined.

He’s seen a man go head-to-head with a pigeon in a game of verbal chicken. The pigeon won.

Sex and nudity are common themes.

He once noticed a couple, both very drunk, use garbage piled along the curb as their location of choice to enjoy each other sexually.

He receives a high volume of calls from residents complaining about other tenants washing their windows in their birthday suits, or about neighbors in the building across the street having sex or walking around naked.

During his early years as a maintenance worker, he caught a couple having sex in the building stairway. Since it happened and still today, they put their heads down when they see him.

In early 2020, he posted an image of an adult sex toy delivered to the building – poorly wrapped and not concealed at all.

When the boyfriend of one of his tenants stayed in her apartment during the pandemic’s climax (pun intended), “everyone on her floor had something to say about it,” including one mom who called the front desk to ask if he could “tell her neighbor to stop moaning so loud” because her kids were trying to sleep.

He’s recounted incidents in which tenants went to throw out trash and ended up getting locked out of their apartments … wearing very little. One man came down to the lobby for help in nothing but boxers, and one woman who called the front desk was found “passed out drunk in front of her door, robe open” and exposed.

Drug dealers also make frequent trips to the building. He tells one story of how one of the regular dealers told his tenants that “he now accepts crypto as payment,” and recalls another time when a “Drug dealer came down to the lobby and complained to me that my tenant is cheap and is always trying to get a discount on his cocaine.”

While it seems like this doorman has in fact seen everything, most of his experiences with residents are not quite this salacious.

One recurring request he receives is to cover for a resident in the middle of a breakup or argument. “I’ll get asked to tell a boyfriend or girlfriend who doesn’t live in the building that the resident does not want to see them or that he or she isn’t home.” It can get awkward. Some of the rebuffed will reply that they see the resident’s lights on. “I just say that they aren’t home.”

This request is so common that he’s established his own policy: “Don’t make friends with boyfriends and girlfriends who don’t live in the building.” Despite these requests and the uncomfortable situations they can cause, it has not dissuaded his perfect attendance for over three years.

When asked what motivates him, he replied that in addition to the financial benefit of year-end payouts for not missing a day, it is the bonds he has built with the people he works with that keep him on track. “You share life’s important moments, watch people grow up, and develop a deep friendship.”

In a job where a bustling city offers the opportunity to see it all, there is not much that can catch this doorman off-guard. But the pandemic changed the norm for all of us. “I was surprised by how many left the city. It looked like a movie set, completely empty.” He explained that doormen meet and greet people all day long, even during the less busy summer months when well-heeled New Yorkers head out of town. During the city’s lockdown phase, it would be three to four hours in between seeing anyone. “It felt very fake.”

But, as most of us have witnessed in the past few months, New York City is open and very much back to a pre-COVID vibe. “About half of the people who turned in their keys at the start of the pandemic have moved back in. Some say New York City is not back but there is a wait list for my building and for the bigger two or three bedroom apartments typically occupied by families.”

Though it may prove difficult to figure out who exactly @Eastdoorman is, the Upper East Side is where he wants to be and plans to remain. “It is the most friendly neighborhood. It’s quiet, the people are more approachable.” When we asked him what his future plans were, he told us he isn’t going anywhere.