UES residents can expect temporary disruptions during an upcoming local hospital’s major expansion along the FDR Drive. The construction is due to commence in the weeks ahead.

This ambitious project is an expansion of the Hospital of Special Surgery (HSS), which will be constructing the Anna-Maria and Stephen Kellen Tower on the FDR at East 71st Street. The new tower, right by the hospital’s main address at 535 East 70th Street, will be 12 stories and over 90,000 square feet. HSS has also agreed to upgrade portions of the Esplanade along the East River. The project is expected to be completed in 2024. 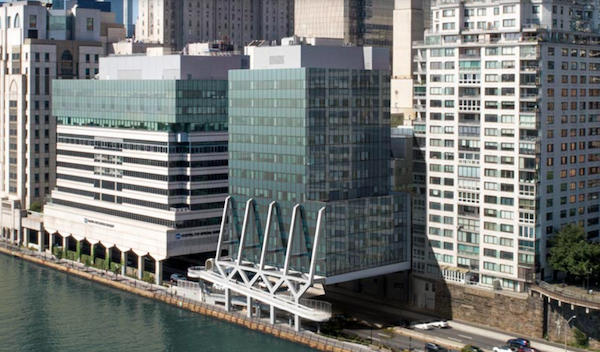 Patch reports that the new tower will cost tens of millions of dollars, and in order to construct it, the pedestrian bridge connecting East 71st Street with the scenic East River Esplanade will need to be removed during a portion of the construction. In the interim, it will be replaced by a temporary bridge.

The construction also plans for the use of a barge to haul materials along the East River, rather than adding congestion to already busy local streets and along the FDR. This should ease residents’ concerns, which were addressed during planning sessions for the tower’s construction by HSS vice president Michael Rawlings.

According to the hospital’s president and CEO, Louis A. Shapiro, “This transformation positions HSS to do what we do best well into the future. It will allow us to give our patients who come from around the world the very best care for decades to come.” The hospital, founded during the Civil War, was nationally ranked No. 1 for orthopedics for the 11th consecutive year by U.S. News & World Report (2020-2021).

More information about the project can be found on HSS’s website.

New Building to Rise at 88th and 2nd Ave