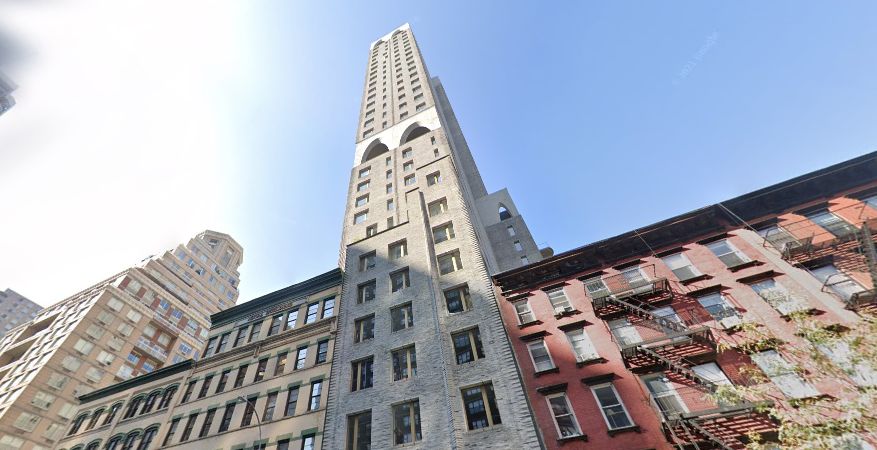 A glamorous Upper East Side abode — presently perched on the market for $33 million — was reportedly made possible thanks to a controversial zoning loophole.

After seven years of high-end real estate drama, the full-service luxury condos at 180 East 88th Street (located along Third Avenue) are available for immediate occupancy. The amenities are all there – a wine room, a basketball court and a soccer pitch, to name a few — but at what cost? The tall tower, clocking in at 524 feet, has angered neighborhood residents and New York City officials alike, who feel developers cheated on their way to the top.

According to The Real Deal, DDG Partners exploited the “tiny lot loophole” to bypass the “sliver law” and erect the sleek structure. Essentially, there are restrictions in place to limit the height of buildings less than 45 feet wide in specific areas. Architect Jorge Fontan breaks it down on his firm’s website, which explains that these skinny structures in question can’t exceed 100 feet — or the width of adjacent streets.

To combat this, DDG divided the purchased parcel into two lots, the second measuring just ten feet deep. The tiny plot successfully acted as a means of bypassing the zoning code, since the minuscule “yard area” ensures the condo doesn’t front East 88th Street. The result? The ability to build up, sans restrictions — resulting in the far-from-humble castle in the clouds.

Though there’s no shortage of height on the uptown skyline, 180 East 88th Street is the largest project on the UES above 72nd Street — which surely contributed to the public outcry. The New York City Buildings Department even shut down construction back in 2016, but the stop-work order was lifted soon after.

Clearly, skirting the rules was a profitable endeavor for DDG. Over half of the units have sold, resulting in $149 million of sales so far. There are 23 apartments still up for grabs, including the aforementioned penthouse. According to the official listing, the home boasts art deco influences throughout the interior and exterior, ceilings that reach 14 feet, and three levels of private outdoor space — totaling a whopping 3,500 square feet.

New Building to Rise at 88th and 2nd Ave