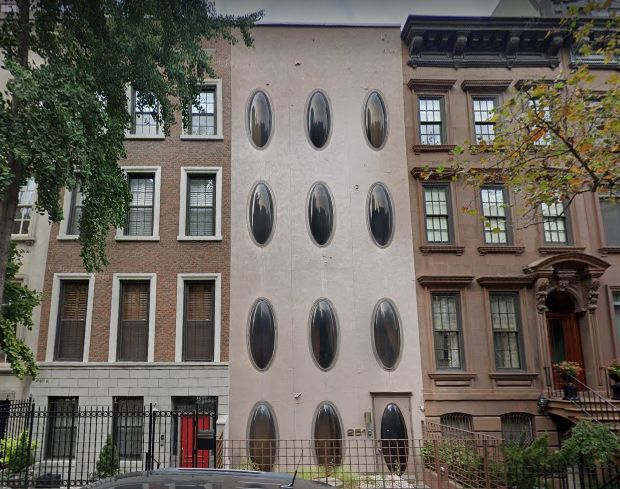 New York City brownstones started really popping up during the first half of the 19th century.

On East 71st Street between Second and Third avenues, they first appeared in the 1860s. One of the brownstones on this street was 251 East 71st Street, and at the time of its construction, it pretty much looked like the buildings surrounding it.

But about one hundred years later, the original structure was demolished – and the frequently-Instagrammed “Bubble House” was born.

According to Daytonian in Manhattan, 251 East 71st Street (in its original form) “change[d] hands somewhat rapidly” and was home to numerous “unremarkable owners who spent their lives modestly and quietly,” including a reverend and a teacher.

But less than a decade later, in 1969, the brownstone was razed to make way for the unique structure that stands today, which was designed by architect Maurice Medcalfe.

While there isn’t a lot of information about Medcalfe, it appears that his personal residence had oval-shaped windows too.

Tom Miller of Daytonian in Manhattan describes the building as “…captur[ing] the Space Age in mortar and glass,” and points out that it was “Completed the same year that the astronauts walked on the moon.”

“An interesting variation of the bay window can be found in the townhouse at 251 East 71st Street, where the architect Maurice Medcalfe used large oval glass bubbles for his windows,” wrote the New York Times in 1976.

“The Bubble House (1969) on East 71st Street is one of the city’s most idiosyncratic modern buildings. Its convex apertures are surprisingly operable swiveling open from the side,” wrote ArchDaily in a 2019 post entitled “10 Buildings That Helped Define Modernism in New York City.”

According to several public records, the four-story building has an elevator and about 2,700 square feet of interior space.

A blurb about the Bubble House was written on a blog called Architectural Visits, and in February 2021, a commenter who lived across the street wrote that “…it looks very abandoned and no one has lived there for years from what I hear. The deck looks like it could fall apart any day and for the one and a half years I’ve lived here, I’ve never seen a light on or person.”

Public records do indicate that there are multiple residents, and that the building is owned by Rabbi Arthur Schneier, who’s been the senior rabbi of Park East Synagogue (at 163 East 67th Street) since 1962.

If you Google 251 East 71st Street, you’ll also see “Appeal-Conscience Foundation” as the building’s commercial tenant. And if you visit appealofconscience.org, you’ll see that the organization – which “[works] on behalf of religious freedom and human rights throughout the world” – was “founded by Rabbi Arthur Schneier in 1965.”

​Score One For The Big Bad Developer