From the ashes rises the phoenix. Usually. But from the ashes of an Upper East Side historic brownstone rose a $20 million contract. 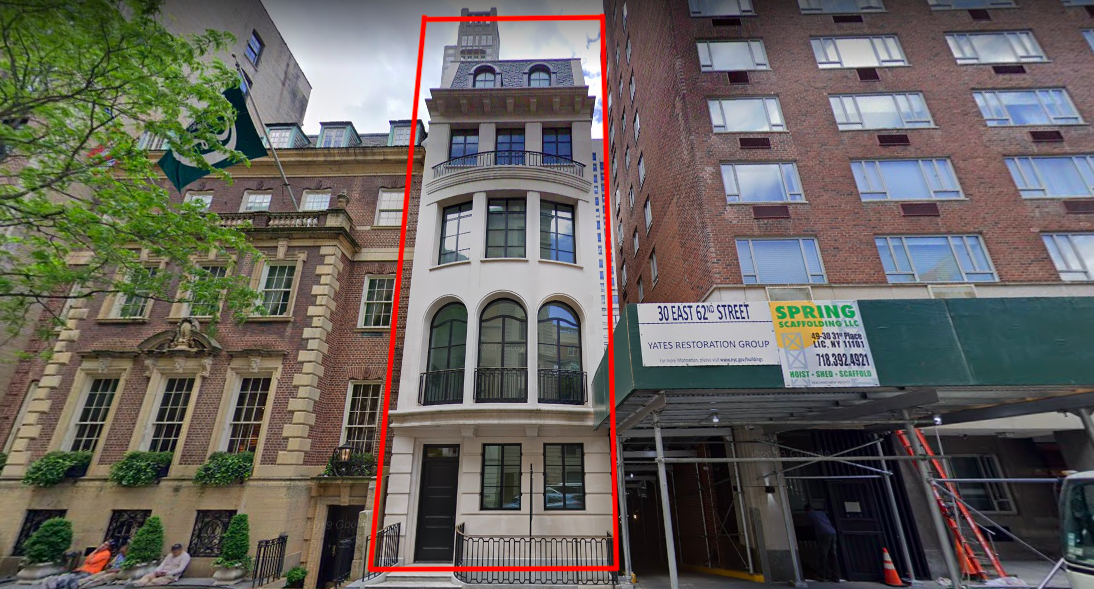 The house at 34 East 62nd Street is not short on intriguing history. The most notorious tidbit is the bitter divorce battle that led the former owner – Dr. Nicholas “Dr. Boom” Bartha – to vengefully blow it up so that he wouldn’t have to turn it over to his ex-wife. Bartha not only destroyed the home, but he also destroyed a piece of New York history.

Number 34 was built in 1881 or 1882 and was one of the few original buildings that survived the early 1900s mass demolition of neighboring brownstones on East 62nd Street. Charles H. Parsons, a fruit dealer, was listed as the first occupant in 1884.

Aside from a turn of the century touch up – some French-style arch-topped windows and the addition of an iron door – the property remained largely unchanged. The New York Times reported that this alteration occurred in 1906 at the direction of “Oliver J. Wells, a lawyer and descendant of an important colonial family from Long Island” and was designed by Charles A. Rich.

By 1927, the building’s numerous rooms were divided into individual apartments. One apartment hosted meetings for a group dubbed “The Room,” a covert group of influential New Yorkers who met to “exchange gossip and tips.” The group itself was founded in 1917 and included Vincent Astor, spy and the son of Titanic victim John Jacob Astor, “the book publisher Nelson Doubleday; Winthrop W. Aldrich, the president of the Chase National Bank; Kermit Roosevelt, a son of Theodore Roosevelt; David K. E. Bruce, a son-in-law of Andrew W. Mellon and a future ambassador to France, West Germany and Britain; the philanthropist William Rhinelander Stewart; and Marshall Field III, a newspaper publisher and heir to the Chicago department store fortune.”

The Room advised President Franklin D. Roosevelt and shared the property with the developer of the Sherman Tank, Siegfried Bechhold. The group ceased its East 62nd Street meetings in the early 1940s and “was eventually supplanted by the more formal intelligence-gathering efforts that resulted in the creation of the Central Intelligence Agency in 1947.”

Hahn filed for divorce in October 2001 and moved with the couple’s two daughters to Washington Heights. Hahn, who is of Jewish descent, alleged in the divorce papers that Bartha “intentionally traumatized” her by hanging up “swastika-adorned articles” in the family home. It was also alleged that Bartha ignored her as she was treated for breast cancer.

A judge ruled in Hahn’s favor and ordered him to pay alimony. At that time, the home was determined not to be marital property, which meant Bartha got to keep it. But he appealed the monetary payments, a case which he lost – along with the brownstone in 2005.

Bartha tried to kill himself numerous times before he sent an erratic 2006 email to Hahn and several others including former Governors George Pataki and Arnold Schwarzenegger, as well as Sean Hannity and Brit Hume from FOX News.

Part of the email read, “You always wanted me to sell the house. I always told you, ‘I will leave the house only if I am dead.’ You ridiculed me. You should have taken it seriously … When you read this line your life will change forever. You deserve it. You will be transformed from gold digger to ash and rubbish digger.”

Bartha tampered with the gas lines and was inside the home when it exploded. He later succumbed to his injuries.

The vacant lot was sold in 2007 for $8.35 million and 34 East 62nd Street was rebuilt in the Beaux Arts style of its neighbors down the street. The new owner was Janna Bullock, “a Soviet-born socialite who morphed from Brighton Beach babysitter to art-collecting real estate mogul after marrying her now ex-husband, Alexey Kuznetsov, a former deputy finance minister of the Moscow region.”

Bullock and Kuznetsov ran into legal problems of their own, both being charged with embezzlement by the Russian government. Kuznetsov served four years in France and Bullock was sentenced to 11 years in absentia. They sold the landmarked home in 2015 for $11.95 million to developer Woodbine & Co.

The identity of No 34’s newest owners remains a mystery, but the New York Post reports that it is “an American family relocating to the city.”