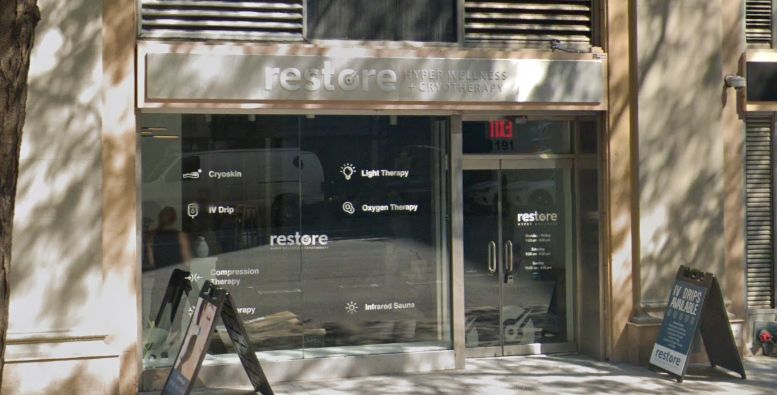 Restore Hyper Wellness currently has an uptown location at 1191 Third Avenue, between 69th and 70th streets.

Restore Hyper Wellness, which “delivers expert guidance and an extensive array of cutting-edge health modalities, such as IV drips and cryotherapy,” is expanding its New York City footprint with two new locations: 1492 Third Avenue at 84th Street (between 84th and 85th streets) and 2148C Broadway (between 75th and 76th streets).

This will be Restore’s second Upper East Side location and its first on the Upper West Side. The company can also be found in Chelsea and has another location opening soon in Park Slope.

Cryotherapy, one of the company’s ‘core services,’ is a treatment that exposes the body to extremely cold temperatures for short periods of time, and people use it for muscle soreness, inflammation, skin conditions and more.

While the company’s reviews are overwhelmingly positive, the Food and Drug Administration released a 2016 article disputing the claims spas and practitioners have made about the benefits of Whole Body Cryotherapy.

“Based on purported health benefits seen in many promotions for cryotherapy spas, consumers may incorrectly believe that the FDA has cleared or approved WBC devices as safe and effective to treat medical conditions,” says Aron Yustein, M.D., a medical officer in the FDA’s Center for Devices and Radiological Health. “That is not the case.” Yustein added, “We found very little evidence about its safety or effectiveness in treating the conditions for which it is being promoted.”

The wellness company also offers IV Drip Therapy, a process in which vitamins and nutrients are administered directly into a patient’s veins. While the practice has many celebrity proponents, experts seem to be wary about its usefulness. “IV hydration is a great thing for people who really need it,” Robert H. Shmerling, M.D. told AARP. “When it comes to these IVs on demand, the short answer is, ‘Buyer beware.’ They are expensive and not clearly helpful in any scientific, proven way.” Dr. Sam Torbati, co-chair of Emergency Medicine at Cedars-Sinai, says that “For the most part, people report feeling better after these treatments because it’s a rapid way to receive hydration,” but added that while “These treatments are mostly harmless [they] really just result in people making expensive urine.”

Other services on the menu include Biomarker Assessments, which “evaluate your blood for insufficiencies and/or genetic markers that would indicate fault in your body’s process to utilize nourishment”; Mild Hyperbaric Oxygen Therapy, which involves sitting in an oxygen chamber “where you can enhance your body’s natural healing processes”; Compression, a “relaxing treatment [that] applies controlled, dynamic pressure to extremities like the arms, legs and hips using NormaTec Pulse Rx 2.0 technology—the gold standard in Compression”; and Red Light Therapy, which “uses red and infrared wavelengths of light that may help to boost energy levels, relieve minor pain and swelling, and balance your mood.”