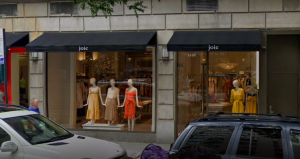 Blue & Cream’s grand opening took place on October 14, and a special appearance was made by rapper and Wu-Tang Clan member Ghostface Killah.

Here’s a promo video of the launch party:

According to the company’s website, “BLUE & CREAM (B&C) is a lifestyle curated through fashion – showcasing the most coveted styles from an edited blend of both established and up-and-coming designers which resonate an effortless aesthetic.”

The website shows a range of products for men, women and children, carrying items from various designers including dresses from LoveShackFancy, which has a nearby location on Madison Ave as well. Blue & Cream also has its own in-house designers, who appear to focus on shorts and t-shirts.

Blue & Cream’s other stores can be found at 1 East 1st Street and in the Hamptons, where the brand was founded.

Wankel’s Hardware to Close After 125+ Years